Cayetano to UN: Give drug war benefit of doubt 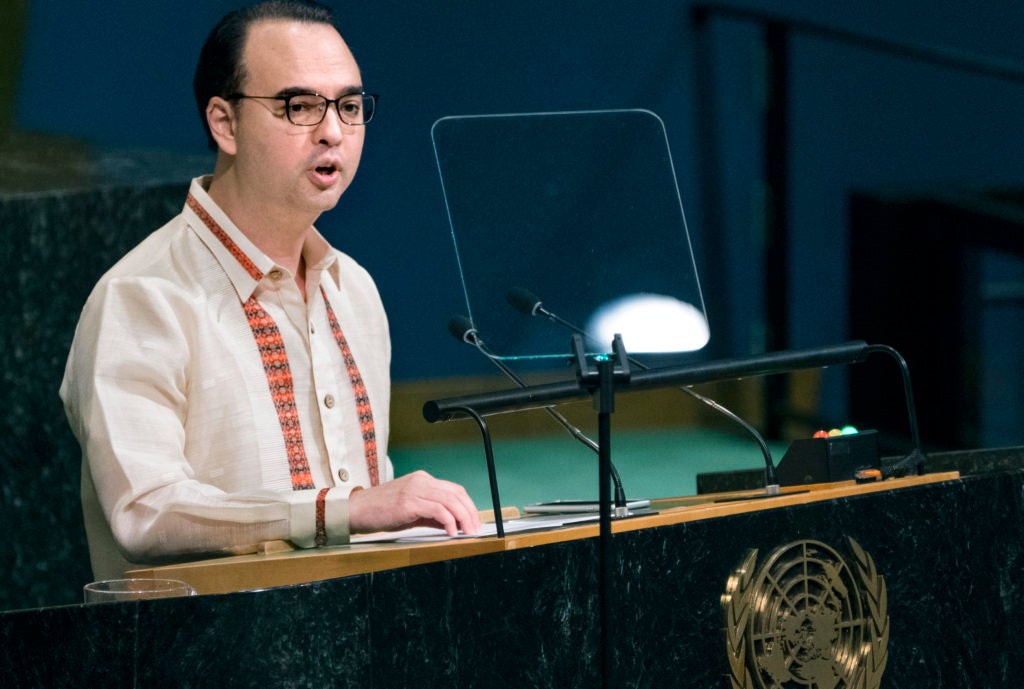 Foreign Secretary Alan Peter Cayetano has called on the United Nations to give President Rorigo Duterte’s war on drugs the “benefit of the doubt,” assuring the international community that the Philippine government remains committed to defending human rights.

Addressing the 72nd UN General Assembly in New York on Saturday, Cayetano said Mr. Duterte’s campaign against narcotics was intended to “save lives, preserve families, protect communities and stop the country’s slide into a narcostate.”

Cayetano spoke after an international study showed that the Philippines ranked first in the 2017 Global Impunity Index and amid mounting concerns over spiraling drug killings and documented human rights violations since Mr. Duterte took office in June 2016.

The killings have drawn expressions of concern over human rights violations in the Philippines from the United Nations, United States and European Union, all of whom Mr. Duterte has badmouthed in response, insisting that the Philippines is a sovereign country and that they should not interfere in its internal affairs.

The International Criminal Court (ICC), however, has warned that it is watching developments in the Philippines and that Philippine officials “ordering, requesting, encouraging or contributing in any manner to the commission of crimes within the jurisdiction” of the court are potentially liable to prosecution.

Malacañang has said Mr. Duterte is open to ICC investigation.

“The Philippines’ comprehensive campaign against illegal drugs is [a] necessary instrument to preserve and protect the human rights of all Filipinos and never an instrument to violate any individual’s or group’s human rights,” Cayetano told the UN gathering.

He reminded the UN member-states that the Philippines was a free country whose freedom to map out policies in resolving matters affecting its people must be respected by other nations.

The Duterte administration, he stressed, has a “human rights agenda” in attaining economic development “for the purpose of protecting everyone, especially the most vulnerable, from lawlessness, violence and anarchy.”

“The Philippines is a sovereign country … It expects its sovereignty to be respected, and that its democratically elected government’s assessment of threats and how to go about addressing them shall be accorded preeminence among nations—or at least the benefit of their doubt,” Cayetano said.

Mr. Duterte, Cayetano said, is only keeping the promises he made during his presidential campaign to put an end to poverty, corruption and crime.

He had promised to kill tens of thousands of criminals and dump their bodies in Manila Bay to fatten the fish.

He also vowed to put an end to the Philippines’ drug problem in six months only to say later that he had underestimated the problem so that his war on drugs would go on to his last day in office.

“As a responsible leader, the Philippine President launched a vigorous campaign against the illegal drug trade to save lives, preserve families, protect communities and stop the country’s slide into a narcostate,” Cayetano said.

“President Duterte and the Filipino people are committed to real change, to finally carrying out long-needed reforms, to addressing national threats long ignored, protecting the human rights of all Filipinos, while doing our part in attaining regional peace and stability,” he added.

Although he defended the President’s brutal war on drugs, Cayetano seemed to have contradicted some of Mr. Duterte’s major policies in curbing the illegal drug trade.

For one, he insisted that “drug addiction calls for cure and not chastisement,” an apparent rebuttal to Mr. Duterte’s penchant to shame drug suspects in public.

According to Cayetano, some 1.3 million Filipino drug addicts had turned themselves in to the authorities under the Duterte administration, but he did not mention how many of those who surrendered underwent rehabilitation.

He lamented that the drug menace “penetrated” some 59 percent of the Philippines’ 42,036 villages and “even the law enforcement” agencies.

In addition, Cayetano played down speculations that Mr. Duterte green-lighted abuses committed by some police officials, including those accused of summarily executing teenagers.

“The President has and will always have zero tolerance for abusive (policemen) as time will show,” he said.