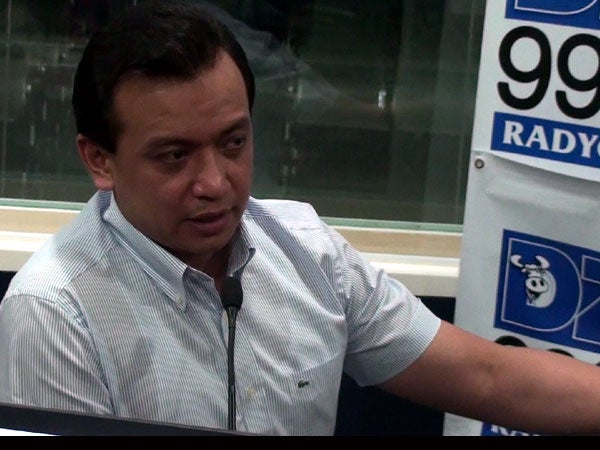 “No such accounts exist.”

This was the response of a DBS Bank Alexandra branch teller in Singapore when Sen. Antonio Trillanes IV asked if there was an account bearing his name with account numbers provided by Presidential Communications Office Assistant Secretary Mocha Uson and broadcaster Erwin Tulfo.

(“I have proven in my visit here at the DBS Bank Alexandra branch in Singapore that Duterte’s allegation that I have a bank account here is not true.”)

(“The bank teller said ‘no such accounts exist’ when I showed my passport together with the two account numbers from Duterte, Erwin Tulfo, and Mocha Uson.”)

(“The teller again answered: ‘No such accounts exist.’ This was heard and witnessed by some reporters who accompanied me to the teller.”)

The senator also said he went to the Hongkong Shanghai Bank Raffles branch where he supposedly had an account. But he found out that there was no such bank.

He then went to the Hongkong and Shanghai Banking Corp. (HSBC) at the Raffles City Tower. But he found that there was no such branch. There was, however, an automated teller machine (ATM) on Raffles Boulevard, Trillanes said.

“A quick check at the HSBC Singapore website showed that there is no HSBC Raffles Branch,” he said.

He said Duterte was “clearly lying” and that his accusation that the senator had foreign bank accounts were all made up.

(“Duterte’s doing this to silence me as a critic and to divert attention from his son Polong’s involvement in the Bureau of Customs smuggling of illegal drugs and my accusations that he had a billions of deposits in his BPI accounts.”)

(“Mr. Duterte, you’ve been checkmated. Stop making excuses. Just sign a waiver so that your loyalists would know how corrupt you are.”)

On Monday, Trillanes flew all the way to Singapore to belie he had offshore bank accounts. /atm