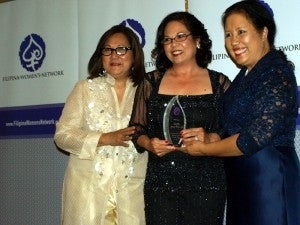 SAN FRANCISCO, California—INQUIRER.net’s director of sales in the United States was named one of this year’s 100 Most Influential Filipina American Women in the US.

Esther Misa Chavez, who is also the president of the Philippine American Press Club, was hailed by the Filipina Women’s Network (FWN) as one of the 100 Most Influential Filipina American Women in the US,  an award given to Filipinas who have shown outstanding work in their chosen fields.

FWN 100 Nationwide Search and Selection Committee Chairperson Lieutenant, Colonel Shirley Saoit Raguindin of the Arizona National Guard, described the awardees as “dynamic leaders who are influential in their respective fields and local communities.”

Raguindin said that Filipinas who have been given the award were “role models” and “powerful examples of women doing extraordinary work who will inspire our youth and future leaders.”

Honoring outstanding Filipinas in the US since 2007, the award was first given to the first Filipina-American to serve as California Chief Justice, Honorable Tani Cantil-Sakauye; the first woman to pass the New York state bar, TLC Beatrice Chairman and CEO Loida Nicolas Lewis; the first woman to be ranked Rear Admiral in the US Navy Dr. Connie Mariano.

As role models, the awardees are tasked to mentor a protégée, selected from nominations submitted from across the US, said Raguindin. This was to ensure that the FWN churns up double the number of Filipina achievers and power movers by 2012.

Protégées are selected by a team of FWN 100 Awardees and undergo personal interviews before their scores are tabulated with the help of members of the Filipino American Association of Certified Public Accountants, explained FWN board chairperson Elena Manghas.

FWN’s 100 Most Influential Filipina American Women for 2011 are as follows:

Behind the Scenes Leaders

The Regents of the University of California

Chair of the Board

Professor Emeritus in Neurology and Pediatrics

Center for Global Art and Thought

University of Hawaii at Manoa

Special Assistant to the President and CEO, Sealaska’s Haa Aani