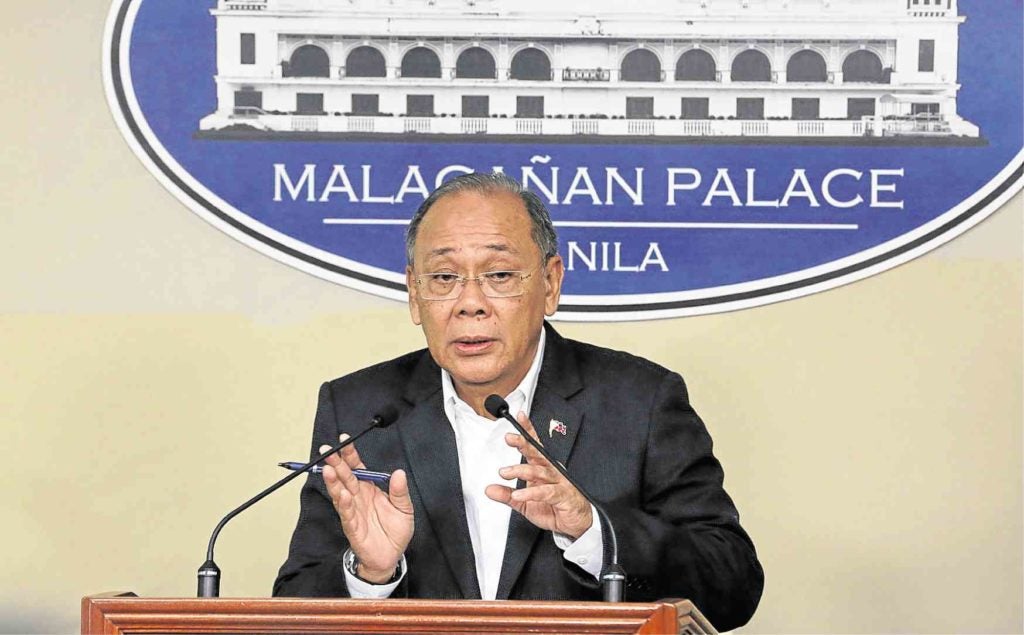 Malacañang on Thursday denied that the Philippines had become China’s “spokesperson” in the Association of Southeast Asian Nations (Asean).

Presidential spokesperson Ernesto Abella said the Philippines, which currently chairs the Asean, was tasked with coming up with the joint communiqué that was satisfactory to all member-countries of the group.

“I think that’s overly interpreting things,” Abella said of criticisms that the Philippines, under the Duterte administration, had gone soft on China.

During the recent 50th Asean Ministers Meeting in Manila, Foreign Affairs Secretary Alan Peter Cayetano admitted that the Philippines did not want to mention in the final communiqué land reclamation and militarization in the South China Sea.

“You know … being chair, our main task was to produce a joint communiqué that all Asean members would sign regardless of differences in position,” Abella said.

“And we did that. And we do hope that all our future Asean building efforts reach full fruition especially for the November summit,” he said.

Since coming to power last year, President Duterte has tried to steer the Philippines closer to China than its traditional ally, the United States.

However, the President had repeatedly insisted that he personally raised the Philippines’ territorial claims in the South China Sea when he last visited Beijing in May.

Duterte said Defense Secretary Delfin Lorenzana, Armed Forces chief, Gen. Eduardo Año, and Police Director General Ronald dela Rosa were present when he told the Chinese leaders during a meeting that he was going to allow drilling for oil in the disputed West Philippine Sea.

“I said, ‘I will drill oil in our territory.’ What was the answer in the bilateral there? In not so many words, they said that could mean war. We are not going to war with them,” he said.

“Their missiles can reach Manila … I don’t have fireworks that can reach that far,” he said in jest.

The President said he then told the Chinese leaders that he understood the situation and that he was there to maintain friendly ties between Beijing and Manila.

“I said I don’t want to go to war and let us just be friends. Just know that someday we will have to talk about it (the territorial dispute) because that is ours. That is ours. Yes. I said I understand. We are both claiming it as ours,” Mr. Duterte said.

“But someday you have to talk to me. But I will not do it now because I come here in good faith and I want to be friends with you,” he said.

China claims 90 percent of the 1.35-million-square-mile South China Sea, running into conflict with many Southeast Asian nations, including the Philippines. It has constructed structures on reefs and atolls to bolster its claims.

An international tribunal in The Hague in 2016 rejected China’s argument that it has historic rights over most of the sea.

Meanwhile, Abella congratulated the Philippine basketball team for its victory over China in the 2017 International Basketball Federation Asia Cup in Beirut, Lebanon, on Wednesday night.