No Filipinos affected by earthquake in China — DFA 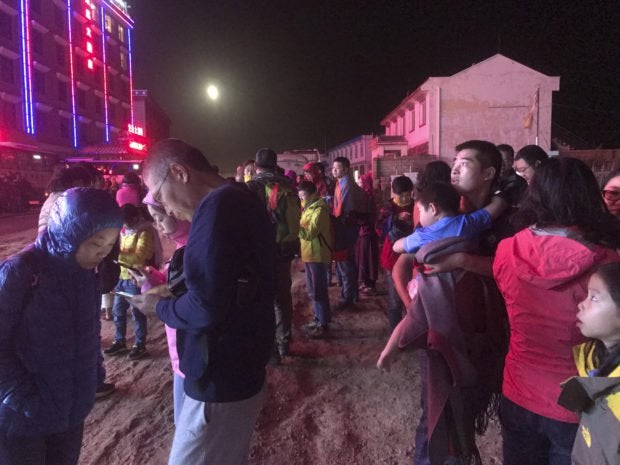 Tourists stand outside of a hotel after being evacuated following an earthquake in Ruo’ergai in southwestern China’s Sichuan province, Tuesday, Aug. 8, 2017. A strong earthquake shook a mountainous region in southwestern China near a famous national park, killing people and knocking out power and phone networks. (Chinatopix via AP)

The Department of Foreign Affairs (DFA) on Wednesday said there were no Filipinos hurt in the 6.5-magnitude earthquake that hit southwestern China.

“According to the Philippine Consulate General in Chongqing, there have been no report of Filipinos affected by the earthquake in Sichuan Province in China,” DFA said.

“The Consulate General continues to closely coordinate with the Filipino community to ensure that Filipinos in the area are safe and that those who may have been affected by the earthquake could be provided needed consular assistance,” it added.

It urged Filipinos needing assistance in Sichuan to contact the Consulate General in Chongqing through the assistance to nationals hotline +(86) 15823972513.

More than a dozen people have died while more than 200 were injured because of the quake.