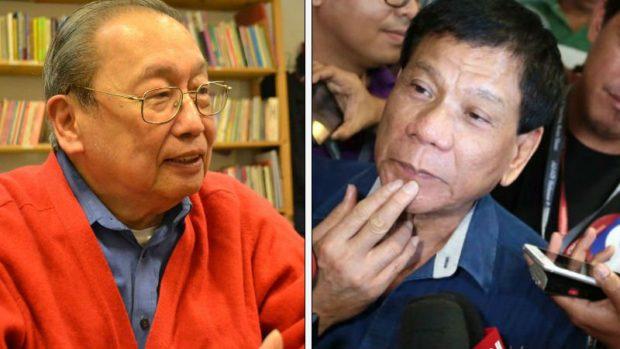 Jose Maria Sison (left), founder of the Communist Party of the Philippines, was a professor of President Rodrigo Duterte in college. (File photos from the Philippine Daily Inquirer)

Citing reports from sources, the NDF said that military officers who are assets of the US Central Intelligence Agency and are close to AFP chief Gen. Eduardo Año “are engaged in a two-stage plot to assassinate Jose Maria Sison, NDFP chief political consultant, and subsequently to overthrow President Rodrigo Duterte.”

The NDF said that while the plot has yet to be verified, it must be immediately exposed in order to discourage its implementation.

The first stage of the plot allegedly involves sending a hit team to The Netherlands to assassinate Sison, with the verbal approvals of Duterte or Año, before or after martial law proclamation nationwide. The members of the hit team will be made to appear as dropouts from the New People’s Army but they will be from the elite forces of the AFP or from the Alex Boncayao Brigade.

The second stage of the plot is to overthrow Duterte for collaborating with the communist for decades, supposedly for betraying the alliance with the US and veering towards Russia and China; as well as for playing favorites with certain military and police officers, and for failing to solve the problem of illegal drugs despite the flagrant violation of human rights.

The AFP, meanwhile, has denied the accusations of the NDF and dismissed it as propaganda.

“Not true at all! This is once again a propaganda line of the left to gain sympathy and toe the anti-US line that they usually take. Again this is such a preposterous statement!” AFP spokesperson Brig. Gen. Restituto Padilla said in a statement. JE