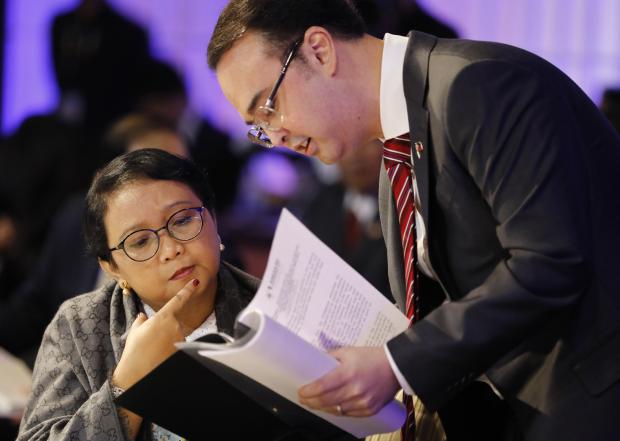 Southeast Asia’s top diplomats slammed North Korea with a sharp rebuke Saturday over its intercontinental ballistic missile tests and admonished Pyongyang to comply with its duty of helping avert conflicts as a member of Asia’s biggest security forum.

The Association of Southeast Asian Nations (Asean) foreign ministers, however, were split on an American proposal to suspend Pyongyang from the Asean Regional Forum, a 27-nation bloc that includes North Korea and its bitter adversaries the US, South Korea, and Japan.

The Asean ministers reiterated in a joint statement their grave concerns over the escalation of tensions on the Korean Peninsula due to the North’s two ICBM tests last month, saying the launches threaten world stability.

The ministers traditionally issue a communique containing their diverse concerns, and their issuance of a separate statement on North Korea’s missile tests and nuclear weapons program reflects their deep worries about the issue.

“These developments seriously threaten peace, security and stability in the region and the world,” the ministers said in their statement. They urged the North to immediately and fully comply with its obligations under UN Security Council resolutions.

They also backed efforts to improve relations between the two Koreas and said their 10-nation bloc was ready “to play a constructive role in contributing to peace and stability” on the Korean Peninsula.

Philippine Foreign Secretary Alan Peter Cayetano said the ministers were divided over a US proposal to suspend the North from the Asean Regional Forum, which will hold its annual meeting on Monday.

North Korean Foreign Minister Ri Yong Ho will attend Monday’s meeting. With the US, Japan and South Korea expected to push for stronger actions against the North, a verbal showdown looms at the Manila forum.

“There were views that, ’How can we hear them out or confront them if they’re not there?’ But there’s also a view that we should give them an ultimatum,” Cayetano said late Friday after discussing the issue with other foreign ministers.

The ministers “strongly call upon” North Korea, as a member of the Asean Regional Forum, to help “maintain the Asia Pacific as a region of lasting peace, stability, friendship and prosperity,” the ministers said in their statement.