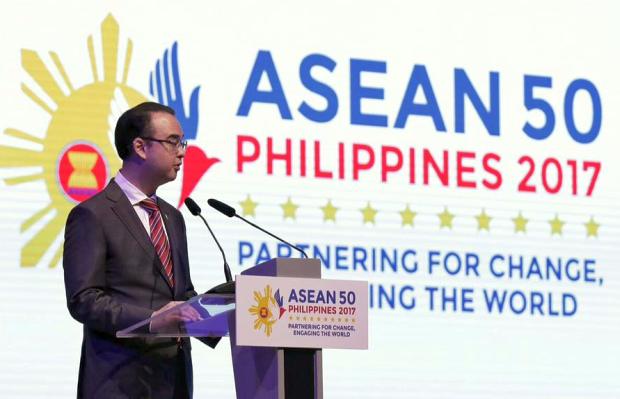 Cayetano made the statement before Southeast Asia’s top diplomats on Saturday during the opening of the annual Asean Foreign Ministers Meeting (AMM) in Manila.

“As an organization, we have contributed norms and values to regional cooperation, the most well-known, and for which we are primarily attributed with, and sometimes criticized for, is the ‘Asean Way’,” he said.

“The approach is primarily based on the principles of dialogue, consensus, cooperation, and non-interference in the internal affairs of other states,” he added.

The foreign ministers’ agenda include the maritime dispute in the South China Sea, North Korea’s intercontinental ballistic missile tests, and terrorism in the region.

Cayetano said peace and stability in the region had been achieved through Asean’s role for constructive dialogue.

“We now enjoy peace, security, and stability in the region largely due to Asean’s key role as a platform for constructive dialogue, consultation, and confidence building among its members and external partners,” he said.

“(D)espite the fact that sometimes there are issues and complicated, sensitive matters between us yet we have found a way to live peacefully and give our region peace and stability,” he added.

Among the region’s top issue is the dispute in the South China Sea where some Asean member-states are claimants. The claimants include–Philippines, Brunei, China, Malaysia,  Taiwan,  and Vietnam.

During the plenary session, Cayetano said the peaceful settlement of regional disputes was “the surest means of achieving peace.”

“If there is a single characteristic that makes our community truly unique and admirable, it is the existence of the peaceful settlement of regional disputes and on regional cooperation as the best, if not the surest means of achieving peace,” he said. /atm