Japan donates $800,000 for Unicef’s health and sanitation programs in Marawi 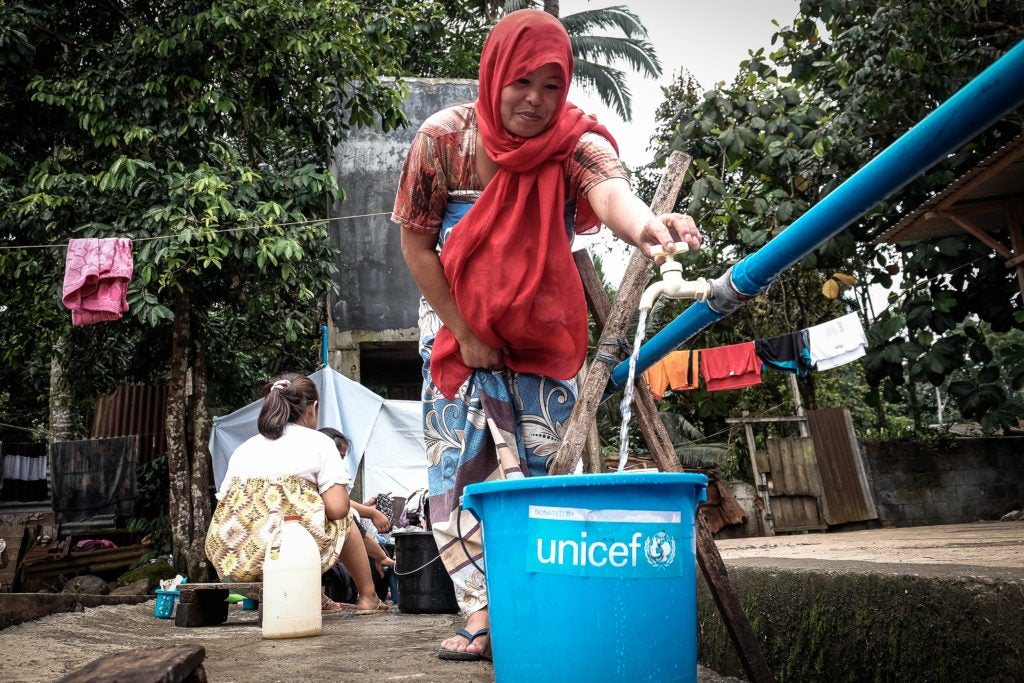 Manila – Responding to heightened risks of diarrhea outbreaks and other health hazards among displaced children, families and host communities in Marawi City and surrounding areas, Japan has extended a US$800,000 grant to Unicef for a stronger response in health, water, sanitation, and hygiene.

Reports of increased incidences of diarrhea including acute watery diarrhea draw attention to scaling up sanitation responses, access to clean water, and reinforce immunization and nutrition services in areas with large concentrations of displaced families, according to a statement Unicef released on Monday.
“Unicef thanks the government of Japan for the generous support that will enable us to scale up response to the displaced and affected population of Marawi. Access to immunization, nutrition, safe drinking water and clean sanitation is a fundamental human right of children and families we serve. Impeded access of these life-saving services poses significant public health threat and adversely affects the livelihoods and safety of women and children to further exacerbates humanitarian crisis and displacement,” said Unicef Philippines Representative Lotta Sylwander, upon receiving the grant through the Embassy of Japan in Manila.
“Unicef programs for children draws strength from continued partnership with the Government of Japan and the generous and timely response received in reaching Filipino children and communities in need,” added Sylwander.
The armed conflict has resulted in 359,680 people displaced (as of 29 July 2017), with many of them living in host communities or across the 75 evacuation centers. Over 200,000 children have been displaced. Many of those living in host-communities are affected by scarcity of household resources, including food and school supplies, in one of the poorest areas in the country.
“Taking the strong bilateral ties between Japan and the Philippines into consideration, which have been reaffirmed by Prime Minister Shinzo Abe and President Rodrigo Duterte on a number of occasions, Japan is extending this humanitarian grant aid to support the affected population in Mindanao,” the Embassy of Japan said in a statement.
The Marawi crisis is now into its third month and there is no expectation that families will be able to return to their homes soon. Needs have been reported across all humanitarian sectors, but poor sanitation and hygiene is key concern in heavily congested evacuation centers and host communities with largest numbers of displaced families.
Unicef has so far distributed 1,751 hygiene kits and 2,166 water kits, and held hygiene promotion sessions in Pantao Ragat, Pantar and Balo-i and Iligan City in Lanao del Norte; and Saguiaran in Lanao del Sur. Unicef also provided water storage bladders, jerry cans and water purification tablets to ensure adequate clean water for drinking and general household use to ease sanitation conditions in evacuation centers.
Water and sanitation response have so far benefited nearly 25,000 people. Health response has reached a few thousand children with micronutrient and Vitamin A supplements along with 3,000 pregnant and lactating women with iron-folic acid tablets.  Unicef also promoted breastfeeding for hundreds of young children by providing breastfeeding kits and sensitization programs for caregivers.
ADVERTISEMENT
FEATURED STORIES
GLOBALNATION
‘Worse than invasion’: China ships poach 240,000 kg of fish daily in PH seas, says group
GLOBALNATION
Duterte ‘privately’ dealing with China invasion in West PH Sea – Palace
GLOBALNATION
Roque: Time for ‘private’ diplomacy on Sino vessels
Read Next
PH skies clear up as ‘Huaning’ slams into China
EDITORS' PICK
PH logs 10,098 additional COVID-19 cases, 150 new deaths
Petron’s Notice of Annual Stockholders’ Meeting 2/2
Smart is fastest 5G Network in PH – Ookla
Smart introduces Smart Barkada with the launch of Double GIGA
‘Bising’ maintains strength, to bring rains over Eastern Visayas, Bicol region
Catanduanes gov orders mandatory evacuation due to ‘Bising’
MOST READ
US banking giant Citigroup closing consumer, retail operations in PH
Expect more deaths due to scant COVID-19 vaccine supply — Duterte
‘Worse than invasion’: China ships poach 240,000 kg of fish daily in PH seas, says group
BREAKING: Severe Tropical Storm Bising enters PAR
Don't miss out on the latest news and information.