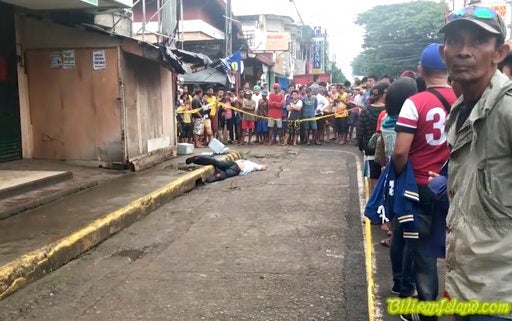 In this image made from July 26, 2017, video provided by BiliranIsland.com, a crowd gathers behind police tape as the body of a man identified by police as New Zealander Simon Rawlinson lies on the street in Naval, Biliran island, the Philippines. Police said they have arrested the suspected gunman in the fatal shooting of a New Zealander on a central Philippine island. Another suspect is being sought. (BiliranIsland.com via AP Video)

MANILA, Philippines  — Police have arrested the suspected gunman in the fatal shooting of a New Zealander on a central Philippine island, officials said Thursday. Another suspect is being sought.

Rawlinson, a long-time resident of nearby Maripipi island, was in Naval for a trip to the market when attacked.

De Lima said a witness led police to the suspected gunman, a local farmer. Found in the suspect’s house were a pistol, bullets and clothes he was seen wearing on CCTV footage during the shooting. The motorcycle driver is still at large.

After taking the bag, the gunman approached Rawlinson who was sprawled on the sidewalk and fired a third shot, hitting him in the head, de Lima said, raising doubt about robbery as a motive for the attack.