In the latest installment of their word war, President Rodrigo Duterte called on self-exiled Communist Part of the Philippines (CPP) founder Jose Maria Sison to go home and bring the fight in the Philippines.

In his visit to the wake of six police officers killed by the New People’s Army (NPA) in Guihulngan City, Negros Oriental on Thursday night, Duterte dared Sison to leave the “comfort” of his life in Utrecht, Netherlands.

“If you are truly a revolutionary leader, my god, come home and fight here,” Duterte said, adding that Sison has been “spending another government’s money” while his “people here, the NPA, die.”

“Inyong leader talawan. Duwag. May leader ba na higda-higda lang ito sa Utrecht? Anong klaseng leader yan? Umuwi ka dito, dito ka mag-istambay (Your leader is a coward. Is there a leader who just lies himself around in Utrecht? What kind of leader is that? Go home, stay here) and do not question my absence,” he added.

Duterte admitted he was “friends” with the NPA when he was the mayor of Davao City because he can “play” with politics.

“Pero ngayon (But now) I do not have that luxury anymore,” the President said. 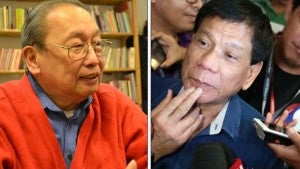 In his second State of the Nation Address, Duterte alleged that Sison is sick from colon cancer. The communist leader immediately denied the chief executive’s claim and instead asked the President to explain his absences.

“It is Duterte wo has to explain his disappearances for medical reasons because the public is entitled to know everyting that pertains to his suitability for public office,” Sison said.

He also told Duterte to see a psychiatrist and “look after his mental health” because “what he says against me is patently baseless and comes from obviously a sick mind.” JPV

READ: Sison hits back at Duterte: Go see a psychiatrist