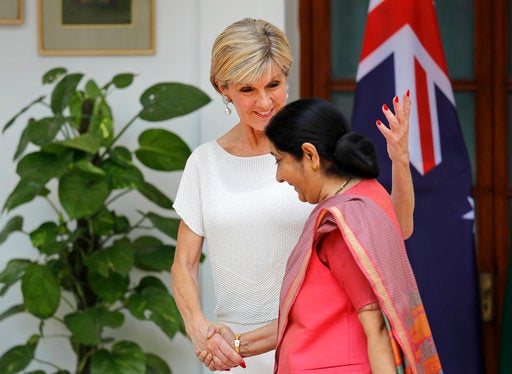 Australian Foreign Minister Julie Bishop said during a visit to India that her country continues to oppose China’s efforts to reclaim and develop man-made islands in the South China Sea.

However, in her speech Tuesday to a forum in New Delhi, Bishop appeared to discourage direct confrontation.

“Our objective must be to encourage China to exercise its economic and strategic weight in a way that respects the sovereign equality of states, that upholds and strengthens the rules-based order and that benefits all countries and peoples,” Bishop said.

She urged the six governments that claim territory in the strategically vital waterway to respect international laws and dispute resolution mechanisms, especially the United Nation’s Convention on the Law of the Sea, using them to “guide behavior and resolve disputes.”

Australia is a close U.S. ally and backed Washington in its use of freedom of navigation operations and other measures to challenge Beijing’s attempts to dominate the waterway through which an estimated $5 trillion in global trade passes annually.

China has denounced U.S. alliances in Asia as outdated vestiges of the Cold War, and in 2013, Chinese Foreign Minister Wang Yi lit into Bishop at a meeting over Australia’s backing of Washington’s criticism of China’s attempts to assert control over a huge chunk of airspace over the East China Sea.

China’s island-building campaign has been seen by some as a precursor to a similar Chinese move in the South China Sea, although Beijing says it will proceed based on need and perceived threats to its interests.