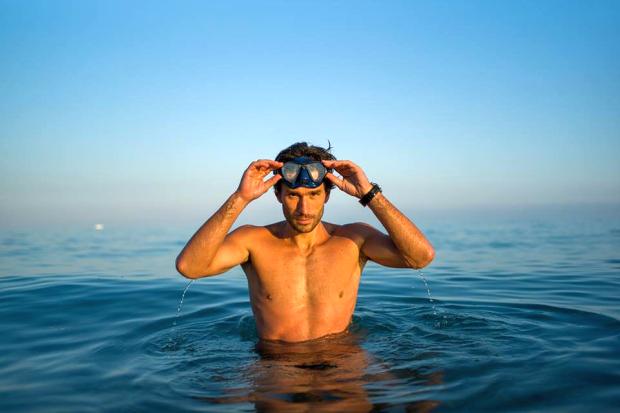 French celebrity freediver Guillaume Néry, who arrived in the Philippines last week, is the goodwill ambassador of the Department of Tourism, tasked with promoting the country as a top freediving destination in Asia, according to a DOT announcement on Monday.

“To have a world-renowned figure like Néry on board is both a privilege and opportunity for the country to position ourselves better in the diving industry of the region,” Tourism Secretary Wanda Tulfo Teo said in a statement.

“The Philippine waters is comprised of nearly one million square miles of sea covering major parts of the Coral Triangle which contains more than 2,500 species of fish and over 500 species of coral. Our extraordinary array of marine life and calm waters makes the Philippines an ideal place to learn and engage more tourists in freediving,” Teo added.

The DOT, in collaboration with Freediving Planet, arranged a month-long freediving expedition in the country for Nery.

A freediving yoga class open to the general public, film viewing of the most notable works of Néry and his team, and a meet and greet for his fans will be held at Shangri-La’s Mactan Resort & Spa, Cebu on Wednesday (July 19), in time of the grand opening of the hotel’s marine sanctuary.

Néry, a filmmaker and an environment advocate, conducted two freediving workshops in Mactan, Cebu over the weekend. He will conduct another one in Moalboal on Aug. 4 to 6.

The three-day workshops will be a full immersion with Néry and will cover the basics of freediving – yoga, deep breathing exercises, complete with practical sessions (dry, pool, and open water practices).

Néry will also be touring Malapascua, also in Cebu, as well as Coron and El Nido, both in Palawan. He will also freedive with Badjaos in Davao as part of his month-long expedition.


As freediving ambassador, Néry will be also joining the DOT in future international dive shows and exhibitions to engage and invite more freediving competitors and enthusiasts alike.

Néry, who specializes in constant weight diving, became the youngest freedive record holder in 2002, diving to a depth of 87 meters at Villefranche-sur-Mer in southern France in 2002. He became the world team champion in 2008 and the individual world champion in Kalamata, Greece in 2011, diving down to 117 meters.

In 2014, he was featured in the the Austrian documentary “Attention – A Life in Extremes” which tackled athletes involved in extreme sports.

He was also shown in the 2015 music video of “Runnin’ (Lose It All)”, a song by British record producer Naughty Boy, featuring American recording artist Beyoncé and English singer Arrow Benjamin. /atm

Read Next
Church, religious groups support NGOs vs terror claims
EDITORS' PICK
OVP: Pilot’s claim vs Robredo ‘never happened’, a ‘malicious fabrication’
Luxe property: A way to build, preserve wealth
House energy committee chair Arroyo bats for cheap electricity
Honolulu Café is the cure for your Egg Tarts and Roastings cravings
PH detects local transmission of Omicron subvariant BA.2.12.1
Petition to reverse Comelec decision on Bongbong Marcos’ DQ case reaches SC
MOST READ
Congress canvassing of votes for president, VP to begin May 24
Heart Evangelista gets a ‘no’ from Chiz Escudero after asking, ‘Do I deserve a bag?’
Man posing as Marcos spox revealed to be an inmate in Bilibid — Guevarra
Closure order vs Megaworld Corp halted as firm vows cooperation with BIR – exec
Don't miss out on the latest news and information.

newsinfo
OVP: Pilot’s claim vs Robredo ‘never happened’, a ‘malicious fabrication’
business
Luxe property: A way to build, preserve wealth
newsinfo
House energy committee chair Arroyo bats for cheap electricity
pop
Honolulu Café is the cure for your Egg Tarts and Roastings cravings
newsinfo
PH detects local transmission of Omicron subvariant BA.2.12.1
newsinfo
Petition to reverse Comelec decision on Bongbong Marcos’ DQ case reaches SC
newsinfo
Congress canvassing of votes for president, VP to begin May 24
May 17, 2022
entertainment
Heart Evangelista gets a ‘no’ from Chiz Escudero after asking, ‘Do I deserve a bag?’
May 17, 2022
newsinfo
Man posing as Marcos spox revealed to be an inmate in Bilibid — Guevarra
May 17, 2022
newsinfo
Closure order vs Megaworld Corp halted as firm vows cooperation with BIR – exec
May 17, 2022
opinion
Leni and the future of the Pink Movement
May 17, 2022
newsinfo
CebuPac places pilot under disciplinary review after ‘baseless’ post vs Robredo
May 17, 2022