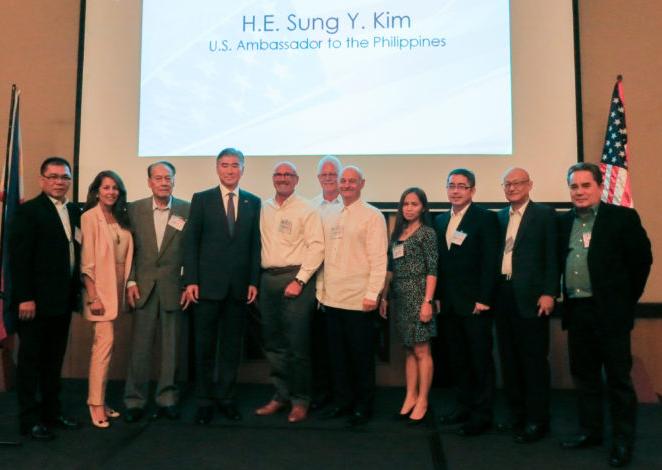 US Ambassador to the Philippines Sung Kim (fourth from left) with members of the Cebu Chapter of the American Chamber of Commerce in the Philippines. (Photo from the US Embassy)

Economic ties between the Philippines and United States (US) would remain intact, US Ambassador to the Philippines Sung Kim told businessmen during his first visit to Cebu City last Thursday.

“I want to assure you that the United States will continue to partner with the Philippines and look for ways to increase foreign investment, reduce trade barriers, and streamline business regulations,” Kim told members of the Cebu Chapter of the American Chamber of Commerce in the Philippines.

Advocating for a level playing field for businesses, Kim said the US would continue to expand bilateral trade and investment ties in the Philippines.

During his trip, Kim met with Gov. Hilario Davide III and Cebu City Mayor Tomas Osmeña and discussed opportunities for further US engagement in Cebu, both in the public and private sectors.

The ambassador also attended an event hosted by American company 3M, which facilitated a discussion on industry trends and showcased cutting-edge technology in the infrastructure, food, and hospital sectors to the Visayan market.

The Central Visayas Region, of which Cebu province is a part, is home to a large population of American residents and gets thousands of visitors from the US every year.

During an economic forum in Beijing last year, President Rodrigo Duterte announced to cut military and economic ties with the US, asserting an independent foreign policy for the Philippines. –Rogelio Nato Jr., INQUIRER.net trainee /atm