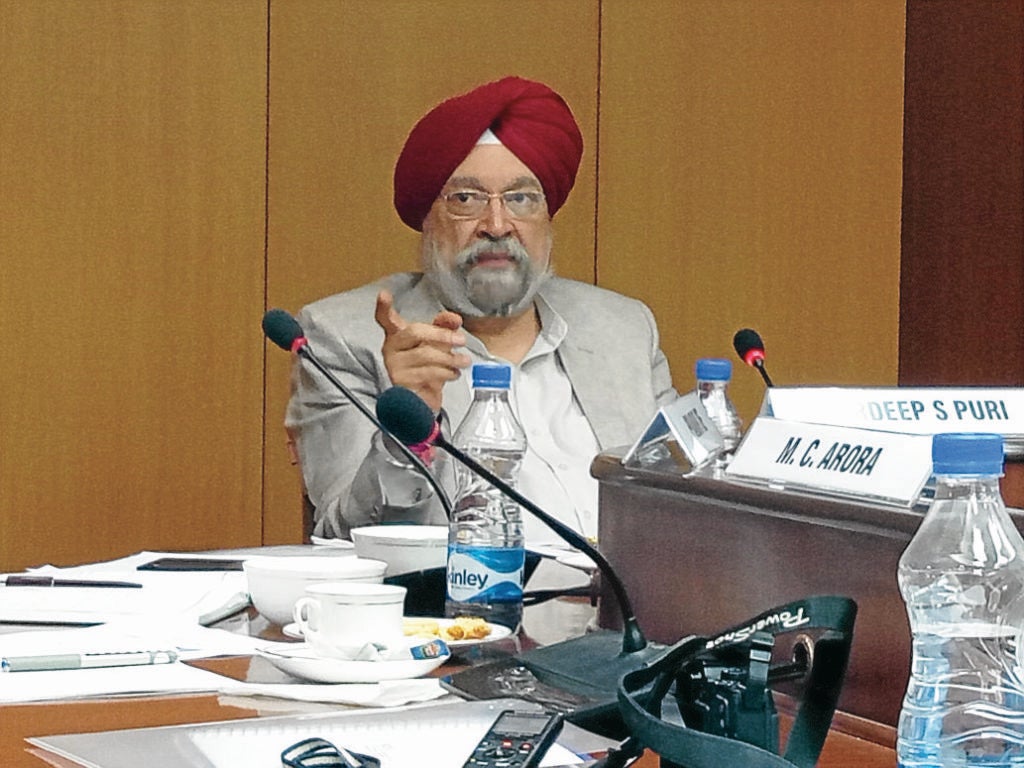 NEW DELHI — The Philippines could end up in hock to China if it is not careful about entering into investment and infrastructure deals with Beijing, according to an Indian think tank.

Hardeep Puri, chair of India’s Research and Information System for Developing (RIS) Countries, warned that the Philippines should be wary of China-funded projects to avoid falling into the same debt trap that has bedeviled other countries that have received massive Chinese loans and investments such as Laos and Sri Lanka.

Puri, a former permanent representative of India to the United Nations, said the Philippines should ensure the China-funded projects would be economically viable and would not impinge on the country’s sovereignty.

‘You have to pay it back’

“It has to be viable projects. You have to pay it back. If it will lead to debt and equity then drop it,” Puri told the Inquirer during a visit of Southeast Asian journalists to India on July 4.

“If debt becomes equity, then you’re selling your country. You (the Philippines) might end up selling more than your islands,” he said.

Expanding its economic clout, China has poured massive amounts in loans and investments into a number of Asean countries such as Thailand, Myanmar, Laos and Cambodia.

“Be careful about these schemes, which bring lots of easy money,” Puri said.

President Rodrigo Duterte visited China in October last year to mend relations soured by a suit brought by the Philippines to the Permanent Court of Arbitration in The Hague challenging China’s claim to almost all of the South China Sea.

He returned with $24 billion in investment and loan pledges from China. Most of the investments would be in infrastructure projects such as railroads and ports.

Puri expressed hope the projects would be economically viable, noting that “in this game there is no such thing as philanthropy or altruism.”

“The consequences are clear — that if you raise the economic stake such that you owe a bank a huge amount of money, the bank will come after you,” he said.

Puri cited the cases of Sri Lanka, which was forced to convert its debts to China into equity to avoid defaulting on payments, and Laos, where China is building a $6-billion high-speed railway the economic viability of which is under question.

China funded an international airport and deep-sea port in Hambantota, Sri Lanka, which have become white elephants and left the country heavily indebted to China.

Costing almost $2 billion, the airport and seaport are losing heavily. The airport receives just one flight a day and the seaport only six ships week.

“If you are an economy which is small and your capacity for revenue generation and capacity for debt repayment is limited, you come to a point where the ability to pay the debt or the amount of debt exceeds the revenue or whatever earnings you have. In that situation, what will happen? It’s not one where you will say, ‘I’ll stop paying,’” Puri said.

To avoid defaulting, Sri Lanka agreed to a debt-to-equity swap with China. It agreed to give China Merchants Port Holdings an 80-percent stake in the Hambantota port for 99 years, including 6,000 hectares of land around the port.

In exchange, China wrote off most of Sri Lanka’s debts. But the deal enabled China to gain access to a strategically located outpost in the Indian Ocean region, though not without protests from the locals who slammed what they called China’s “colonization” of Sri Lanka.

“If you have a small economy and 70 percent goes to debts, you cannot run that country efficiently,” Puri said.

Puri noted that the disputed islands occupied by China in the West Philippine Sea are heavily fortified.

“Those islands have got force. It’s a $12-trillion economy and in addition to that, China has the capacity to use force,” he said.

In Laos, China began construction of the $6 billion high-speed railway from Kunming in China’s Yunnan province to Vientiane, the Laotian capital, in December last year.

Puri said it would take 11 more years for the railroad to  become economically viable.

In nearby Myanmar, China built a 770-kilometer oil and gas pipeline from the Kyaukpyu port to Yunnan at a cost of $1.5 billion. Now, China is demanding 85-percent ownership of the port.

To avoid the pitfalls that have left some countries mired in debt to China, Puri said China’s One Belt, One Road initiative, under which the projects come, should be overhauled to consider sovereignty and economic viability.

Read Next
Cayetano: PH will remain an enemy to none, a friend to all
EDITORS' PICK
46% of adult Filipinos unwilling to get COVID-19 vaccine; only 19% willing
Just wait as 75% of vaccines already went to 10 countries – Duterte
Café-quality coffee at home with NESCAFÉ GOLD
JC Cares Foundation extends support to bloodletting program
3 things you need to know about your laundry detergent
PH won’t waive full immunity against suits of vaccine makers
MOST READ
Commonwealth shooting a ‘misencounter’ between PNP and PDEA; 2 die – police
Commonwealth shooting: PDEA says agents on legit operation near mall
Vivoree Esclito condemns body shaming after being teased on ‘It’s Showtime’
Cavite officials mourn death of former Gov. Ayong Maliksi
Don't miss out on the latest news and information.