Year after arbitration: Options and directions 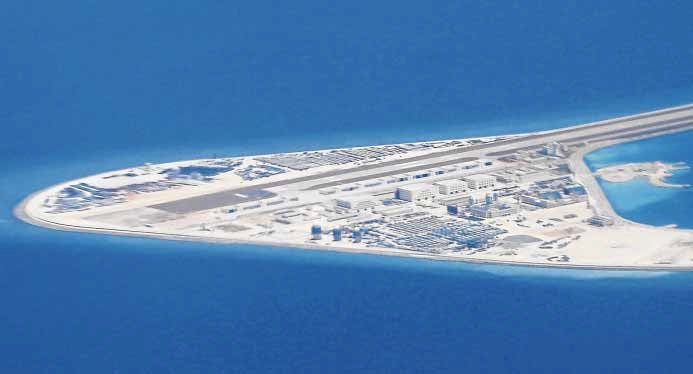 THREAT TO FREEDOM OF NAVIGATION This photo, taken from a Philippine Air Force C-130 transport plane, shows Chinese structures and an airstrip on Zamora Reef that are considered a threat to freedom of navigation in the West Philippine Sea. —AP

(Editor’s Note: The author is a former ambassador of the Philippines to the United States. As former President Benigno Aquino III’s foreign secretary, he led the Philippine team in challenging China’s claim to almost all of the South China Sea in the Permanent Court of Arbitration in The Hague. He currently chairs the Stratbase ADR Institute.)

Today marks the first anniversary of the arbitral tribunal’s award on the case that the Philippines filed against China.

This anniversary presents an opportunity for us to look closely at our country’s direction. Together, we can discuss where we have come as a nation and where we are headed.

Where does the Philippines stand today?

In the past 12 months, China has been provided a most favorable environment in the Philippines.

As the recipient of many olive branches, China has had the opportunity to return the gesture, by acting in kind and with the respect of a good neighbor.

Over the same period, we have not seen the change that we would have wanted from Beijing.

It has neither changed in its direction nor exercised greater restraint.

Despite its friendlier face, we do not see restraint in China’s militarization and unlawful activity in the West Philippine Sea.

Based on reports from respected organizations, China has continued to fortify its military position in the South China Sea.

Satellite imagery suggests today that it is building structures for missile systems, including at our own Panganiban, or Mischief, Reef.

China’s “civilian” facilities threaten the freedom with which all vessels (public, commercial, or fishing) ply the waters, as well as the freedom exclusive to our people to benefit from the wealth of resources there.

Beijing’s aggressive actions are not accidental, they are intentional, and they continue to this day.

Chinese President Xi Jinping’s threat of war against the Philippines, if true, shows how the Chinese leadership perceives us.

Despite an effort in this country to encourage sobriety and restraint, I am concerned that we will reap no more than a friendly face.

Are these developments new?

China’s expansion into the West Philippine Sea began many years ago. We appealed to them bilaterally and attempted to work with them, together with the Association of Southeast Asian Nations (Asean), multilaterally.

These appeals, I regret to say, not only fell on deaf ears, but also did not deter China from pursuing its unlawful agenda.

Our country continued past this difficulty, making use of a peaceful path that was still available to us—arbitration.

Before an international court of neutral experts, our country’s team laid out the case against China’s behavior and the very basis of its unlawful claims: the nine-dash line.

We took a risk when we went to court.

As confident as we may have been in the case, the decision was ultimately not in our hands.

We could then only hope that the tribunal would agree with our views.

In a decision that stood apart from power and stood strongly on facts, the arbitral tribunal vindicated our country and, just as important, upheld the rule of law over the waters in the South China Sea.

Now, the ruling is an integral and indelible part of the universal body of international law.

Today, on the anniversary of the ruling, we should be proud of our country’s leadership on this issue.

It was a leadership that began from a lonely place but, because we stood for what is right, we also gained the respect of the responsible community of nations.

While there are attempts by Beijing to undermine the ruling and its status, there is no doubt that the Philippines has made a strong contribution to our region.

The ruling has benefited not only the claimants, including China, but also the rest of the world.

Through it, we have more clarity on maritime rights—what we can claim, what we can do, and where we can find constructive areas of cooperation.

Where could we go from here?

At this juncture, I would like to share a few suggestions about how we might make use of our current options to best protect our position in the West Philippine Sea.

First, I believe that our leadership should be categorical on protecting our sovereignty and our national patrimony.

This refers to our stance on what is ours, by history and by law, in the West Philippine Sea and all throughout our archipelago.

This notion is at the core of our responsibility to be stewards of our resources for all Filipinos, including future generations.

In consonance with our Constitution, we should pursue efforts to explore our resources to the ultimate benefit of the Filipino people.

We cannot trade away our sovereignty or sovereign rights, and we should not give even the impression that we are willing to do so.

To further safeguard our interests and protect our rights, we should work with others, bilaterally and multilaterally, to ensure the freedom of navigation that underpins the safety of all our oceangoing trade.

Second, I suggest that we exhaust all diplomatic avenues that are available to us in promoting the ruling and the rule of international law.

We must protest what is unlawful, coercive, and contrary to the correct principles that govern relations between states.

We should seek cooperation from like-minded states.

We should be ready to approach the UN General Assembly to appeal to the global village of nations.

Any suggestion of war should be shunned. Instead, we should exhaust our diplomacy by protesting the threat of war, however unlikely it may be in actuality.

We cannot allow others to play with the threat of war when our submitted disputes have already been clarified in the ruling.

Finally, I believe that we should reassume our leadership.

Already, we have accrued its benefits: the clarity of our sovereign rights, the respect of our friends and neighbors, and the contribution that we made toward reinforcing international law.

As we underwent the bold process of arbitration, our calls for support did not go unanswered.

We had, and hopefully continue to have, the support of the responsible community of nations.

Leadership is not a mantle easily shed.

Even today, countries hope for us to lead from our position of strength.

No other nation can support us more than we do ourselves, and there can be no unity over the right course of action unless we initiate this unity.

As this year’s chair of Asean, we have an opportunity that comes only once in a decade.

There is room for us to steer the discussions on the proposed code of conduct, to ensure that it is effective, binding, and quickly concluded.

We believe that the arbitral ruling should be an integral part of the code of conduct framework being finalized and the eventual code of conduct, if it is concluded.

After all, our region cannot promote the rule of law while ignoring the law as it stands.

There is room for us, in multilateral dialogue, to bring our nation’s perspective to the forefront of our regional organization.

We cannot emphasize enough that renewed leadership can further strengthen this administration’s position with the people.

More than eight out of 10 Filipinos believe that we should assert our rights in the West Philippine Sea as provided by the law.

To end, the positions that we take today will resound over time.

In taking the right strategy, our government can only enhance its standing among our peers and ensure its legacy for the generations that will succeed us. —CONTRIBUTED