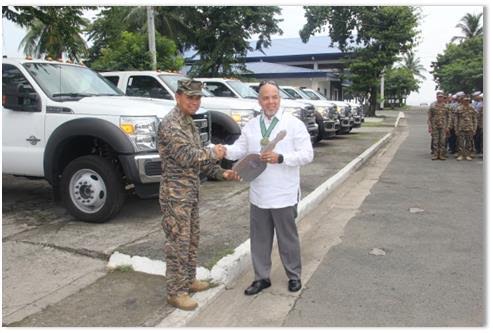 Frederick Riker (right) hands over the ceremonial truck key to Philippine Navy Capt. Alfonspin P. Tumanda Jr. during the transfer of 12 Ford F-550 trucks to the Philippine Naval Special Operations Group (NAVSOG) at Naval Base Heracleo Alano, Sangley Point, Cavite. Riker is the security cooperation manager for the Joint U.S. Military Assistance Group, and Capt. Tumanda is the Commander of NAVSOG. (Photo courtesy of Armed Forces of the Philippines)

The United States government turned over 12 Ford-550 trucks to the Armed Forces of the Philippines Naval Special Operations Group (NAVSOG) in a June 29 ceremony held at a naval base in Cavite.

“Representatives from the US Military Assistance Group delivered the trucks to the officials of the AFP NAVSOG in a turnover ceremony held at Naval Base Heracleo Alano, Sangley Point,” the US Embassy in Manila said in a statement on Wednesday.

The NAVSOG is the Philippine Navy’s elite force trained in various special operations.

Captain Alfonspin Tumanda, Jr. and Commander Jim Razo, the commander and deputy commander of NAVSOG, respectively, received the trucks from the US officials.

“The trucks will help in mobilizing NAVSOG units throughout the Philippines including those in Tawi-Tawi, Zamboanga, and Davao as well as aiding the transport and deployment of rigid-hulled inflatable boats also delivered by the US to the AFP,” the embassy said.

The US has already sent $200M worth of assistance grants to the Philippines over the past three years. Daphne Galvez, INQUIRER.net trainee / JPV