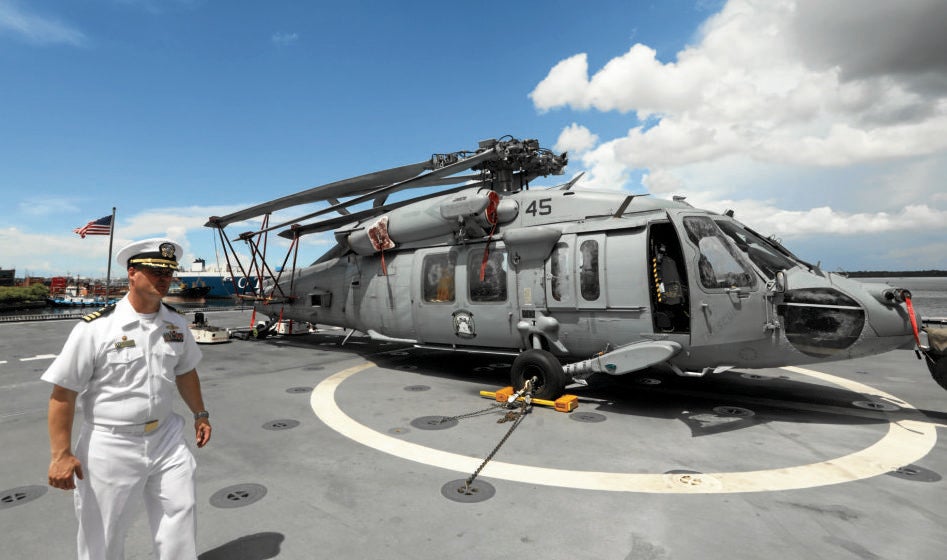 ‘SAMA-SAMA’ Cmdr. Doug Meagher of the USS Coronado gives journalists a tour of the ship’s flight deck during the launching of the “Sama-Sama” military exercises of Filipino and American Navy men. —TONEE DESPOJO/CEBU DAILYNEWS

CEBU CITY — Philippine naval squadrons based in Central Visayas and their American counterparts have begun a series of exercises focused on security and disaster preparedness and humanitarian aid this week.

US Navy Capt. Alexis Walker of the Destroyer Squadron 7 said on Monday that US forces have realized over the years that “not one Navy can respond” to a humanitarian crisis or disaster.

“So we need our allies, our partners, our friends to be able to conduct a comprehensive response to challenges in the maritime environment,” Walker said.

About 200 sailors and Marines from the Philippines and the United States will take part in the June 19-25 maritime exercises dubbed “Sama-Sama” 2017.

The US Navy deployed the littoral combat ship USS Coronado, the expeditionary fast transport ship USNS Millinocket, and one P-8 Poseidon aircraft for the exercises.

The Philippine Navy units include BRP Gregorio del Pilar, BRP Agta, one AW109 helicopter and one BN-2 Islander aircraft. A Philippine Marine contingent and other naval staff are also joining the exercise.

The joint exercises between the two defense treaty allies are being held in the region for the first time in eight years, according to Palces.

“[The exercises] will be beneficial for all of us, especially for readiness,” he said. “When we have disasters, calamities and everything, the Philippine Navy is prepared for that.”

He said, however, the country would still need the assistance of the US Navy in dealing with emergencies.

“We got to use and know their tactics, techniques, procedures and also their equipment, [that are] very beneficial to Philippine Navy,” he said.

Walker said the exercises would also benefit US naval forces because they could learn from the best practices of the Philippine Navy.