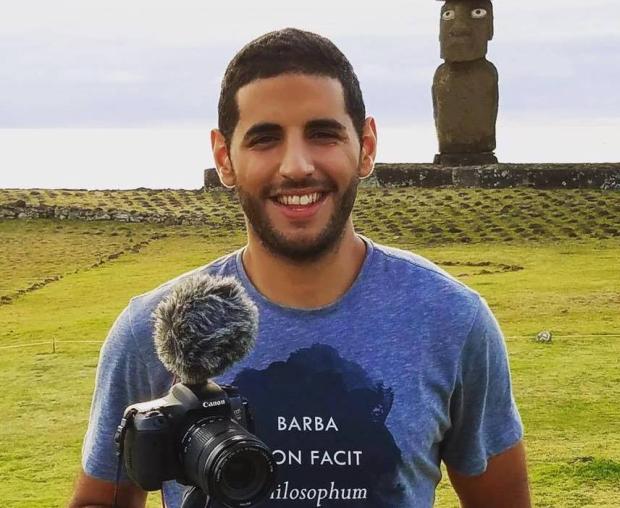 Nuseir Yassin, better known as Nas, poses on Easter Island in October 2016. (Photo from the Nas Daily page on Facebook)

Nuseir Yassin is the 24-year-old Arab-Israeli vlogger behind the Nas Daily page on Facebook, which features one-minute videos on various topics.

His video was a lot cheaper than the controversial TV ad produced by McCann Worldgroup Philippines for the Department of Tourism (DOT), which was recently pulled out after netizens pointed out that it was similar to a South African ad.

At the end of the video, he was revealed to be blind as he made his way with a cane around Vigan’s Calle Crisologo.

The DOT has pulled out the ad and canceled its P650-million contract with McCann Worldgroup Philippines.

In his video, Nas said his video only cost him $100 while the DOT splurged millions of dollars on tourism promotion ads.

He said governments would spend millions of dollars on tourism ads copied from other promotion videos, an apparent swipe to the copycat controversy involving DOT’s “Sights.”

“That’s why government spends millions of dollars on tourism videos that are just shitty copies of other videos. This happened in the Philippines,” Nas said.

“So I decided in New York as a one-man team to make the best video about the Philippines in 30 seconds,” he added.

Nas then shared his experience staying in the Philippines for eight days where he felt the love of the Filipinos who offered him free food and lodging.

He also shared his experience giving back to the Philippines where he said the food and drinks were cheap. He spent his money giving burgers to informal settlers and even treating a whole village to rum.

In that video – which has garnered 13.9 million views since being uploaded March 7 – Nas recommended a more appropriate slogan than “It’s More Fun in the Philippines.”

He recommended: “There’s more love in the Philippines.”

He called the Philippines his most favorite country to date.

In a post that accompanied his latest video, Nas suggested that governments could make simple videos that would not cost millions of dollars.

“When it’s not your own money, it’s so easy to spend it the wrong way,” he said. “and in countries where every dollar is needed, that becomes wasteful. So I tried to take a swing at making a tourism video for the Philippines for $100.”

“If tourism departments are interested in exposure – and not cinematography and actors – then this should do the job,” he added. “Some of the best videos are the simplest.” /atm/rga