YOKOSUKA, Japan  – The search for seven U.S. Navy sailors missing after their destroyer collided with a container ship off Japan was called off Sunday after several bodies were found in the ship’s flooded compartments, including sleeping quarters.

Vice Adm. Joseph Aucoin, the commander of the Navy’s 7th Fleet, described the damage and flooding as extensive, including a big puncture under the waterline. The crew had to fight to keep the ship afloat, he said, and the ship’s captain is lucky to have survived.

“The damage was significant, this was not a small collision,” he said.

Navy divers found “a number of” bodies in the ship Sunday, a day after it returned to the 7th Fleet’s home base in Yokosuka, Japan, with the help of tug boats. Aucoin, speaking at a news conference at the base, wouldn’t say how many bodies were recovered, pending notification of next of kin.

He said much of the crew of about 300 was asleep when the collision happened at 2:20 a.m. Saturday, and that one machinery room and two berthing areas for 116 crew members were severely damaged.

“You can’t see most of the damage, the damage is mostly underneath the waterline, and it’s a large gash near the keel of the ship,” he said. “So the water flow was tremendous, and so there wasn’t a lot of time in those spaces that were open to the sea. And as you can see now the ship is still listing, so they had to fight the ship to keep it above the surface. It was traumatic.” 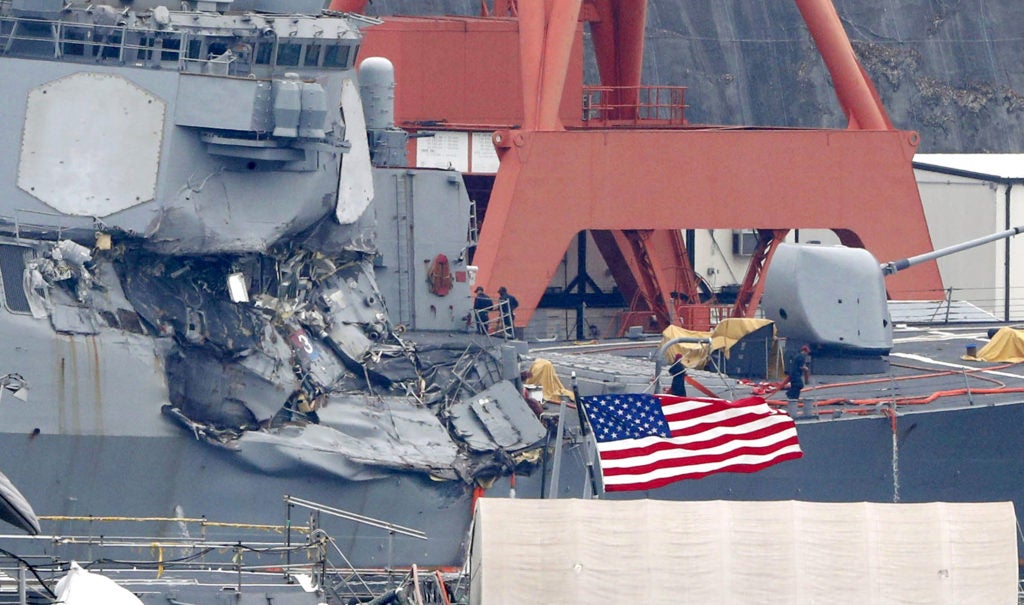 Damaged USS Fitzgerald is seen at Yokosuka Naval Base, south of Tokyo, Sunday, June 18, 2017. Navy divers found the bodies of missing sailors Sunday aboard the stricken USS Fitzgerald that collided with a container ship Saturday in the busy sea off Japan, the Navy said. Kyodo News via AP

The Fitzgerald’s captain, Cmdr. Bryce Benson, was airlifted from the ship’s deck after daybreak Saturday to the U.S. Naval Hospital in Yokosuka with a head injury. Two other crew members suffered cuts and bruises and were also flown out by helicopter. ”His cabin was destroyed, he is lucky to be alive,” Aucoin said of Benson.

The container ship ACX Crystal weighs 29,060 tons and is 222 meters (730 feet) long, much larger than the 8,315-ton Navy destroyer. The container ship’s left bow was dented and scraped, but it did not appear to have sustained any major structural damage.

The Japanese coast guard questioned crew members of the ACX Crystal, and is treating the incident as a case of possible professional negligence, said Masayuki Obara, a regional coast guard official.
Conditions were clear at the time of the collision, though the area is particularly busy with sea traffic.

The victims might have been killed by the impact of the crash or drowned in the flooding, said Navy spokesman Lt. Paul Newell, who led news media on a visit to get a first-hand look at the mangled vessel.
Aucoin wouldn’t speculate on the cause of the collision. He said he would order a full and thorough investigation.