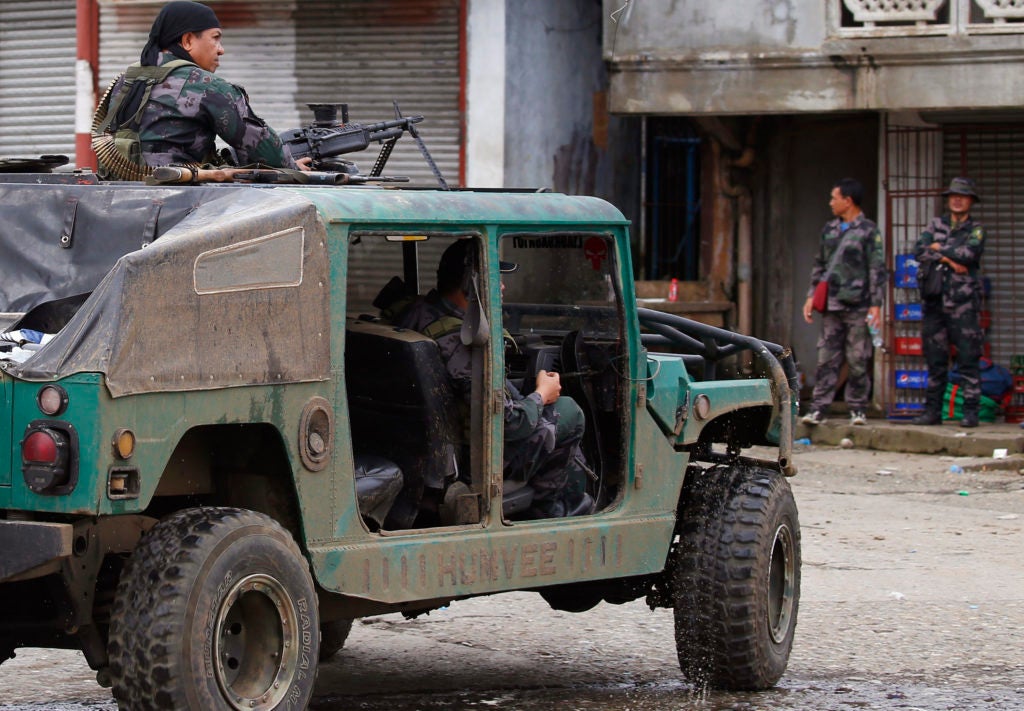 Police patrol the streets of Marawi city as government troops battle with Muslim militants who continue to hold their ground in some areas of the city for almost a week Monday, May 29, 2017 in southern Philippines. AP FILE PHOTO

JAKARTA, Indonesia — Indonesia says it’s looking to set up joint patrols with the Philippines and Malaysia to prevent Islamic militants who have laid siege to a city in the southern Philippines from entering its territorial waters.

Indonesia’s military chief, Gen. Gatot Nurmantyo, said late Monday that he and Defense Minister Ryamizard Ryacudu would meet next week with their counterparts from Malaysia and the Philippines on Indonesia’s Tarakan island in northern Borneo, just across the border from Sabah, Malaysia. He said they’ll discuss increasing security and signing an agreement to step up joint patrols.

The conflict in the city of Marawi has raised fears that the Islamic State group’s violent ideology is gaining a foothold in the Philippines’ restive south, where Muslim separatists have fought for greater autonomy for decades.

Nurmantyo, speaking with reporters and military officials in the capital, Jakarta, said Indonesia needs to be aware of the movement of IS-aligned militants in the Philippines who assaulted Marawi three weeks ago because Indonesia already has sleeping cells that most likely have been long embedded in the country. He said IS-affiliated cells exist in all of Indonesia’s provinces except Papua.

Authorities in Indonesia, the world’s most populous Muslim-majority nation, have carried out a sustained crackdown on militants since the 2002 bombings by al-Qaida-affiliated radicals that killed 202 people in Bali. In recent years, it has faced a new threat as the rise of the Islamic State group in the Middle East has breathed new life into local militant networks and raised concerns about the risk of Indonesian fighters returning home.

“So far, we have not found any indication of Islamic militants infiltrating from the Philippines to our territory,” Warsito said. “We have conducted intelligence, territorial and combat operations to anticipate it.”