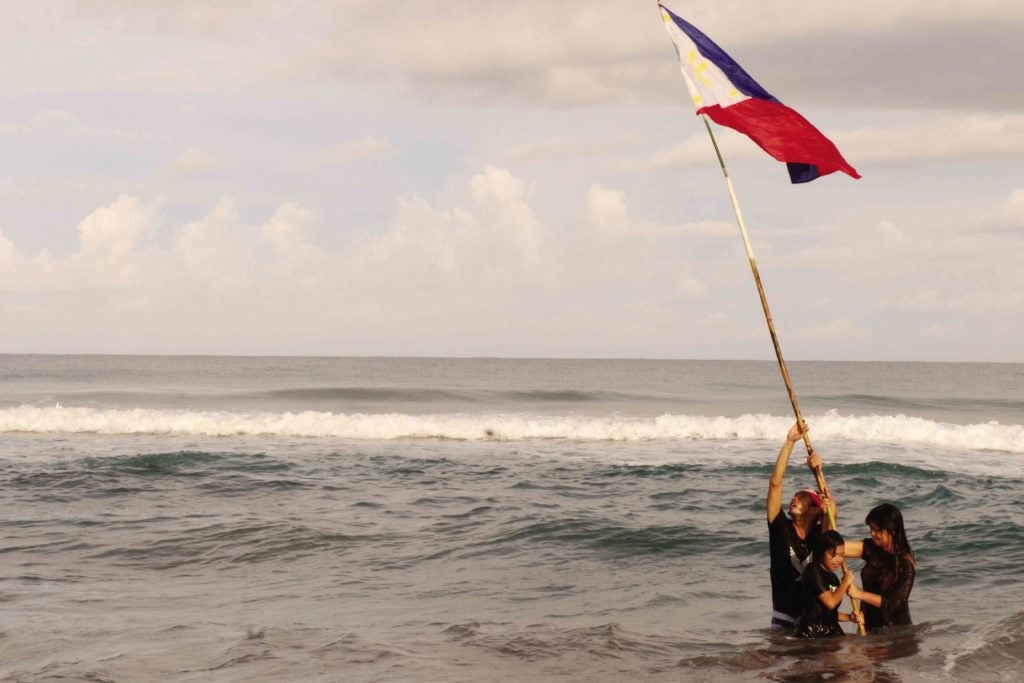 Surfers in Zambales province raise and wave the Philippine flag in the West Philippine Sea to express their resolve to protect the country’s territory. —CONTRIBUTED PHOTO

About 50 members of the group Dakila gathered on the Greenspace Liwa beach in this town for a flag-raising ceremony in the waters.

“We want to explore the concept of freedom in the context of the Philippines’ situation today,” said Micheline Rama, executive director of Dakila, a group composed of artists, students and social activists.

The freedom of the Philippines is rooted on its sovereignty, Rama said, noting the threats to the country’s sovereign territories.

“We are taking this opportunity to make a statement that even in the face of a real threat to our sovereign territories, Filipinos remain brave and patriotic,” she said.

Before hoisting the flag, the group staged a two-day camp, called “Kamp Kalayaan” (Freedom Camp), and unveiled a mural painting with the theme “Kulay Kalayaan” (Color of Freedom).

Rama said the camp allowed them to take part in group discussions on pressing issues about freedom and human rights.

She said the mural on a 1,260-square-foot (117.06 sq m) wall celebrated the “freedoms and rights that Filipinos enjoy and continually fight for.”
“The mural visualizes the spirit of the 12th of June by marking this wall adjacent to the West Philippine Sea with the words of ’Lupang Hinirang,’ the Philippine national anthem, and artistic interpretations of our freedoms,” Rama said.

She said each panel of the mural was inspired by the lyrics of the national anthem and integrated the Universal Declaration of Human Rights.

“It’s finding the representation of what we are fighting for until this day. We want freedom from conflicts, poverty, and threats to human rights,” she said.

Other groups, including Rise and Excel in Arts (Rexa) Center and Active Vista, joined the Independence Day celebration here.