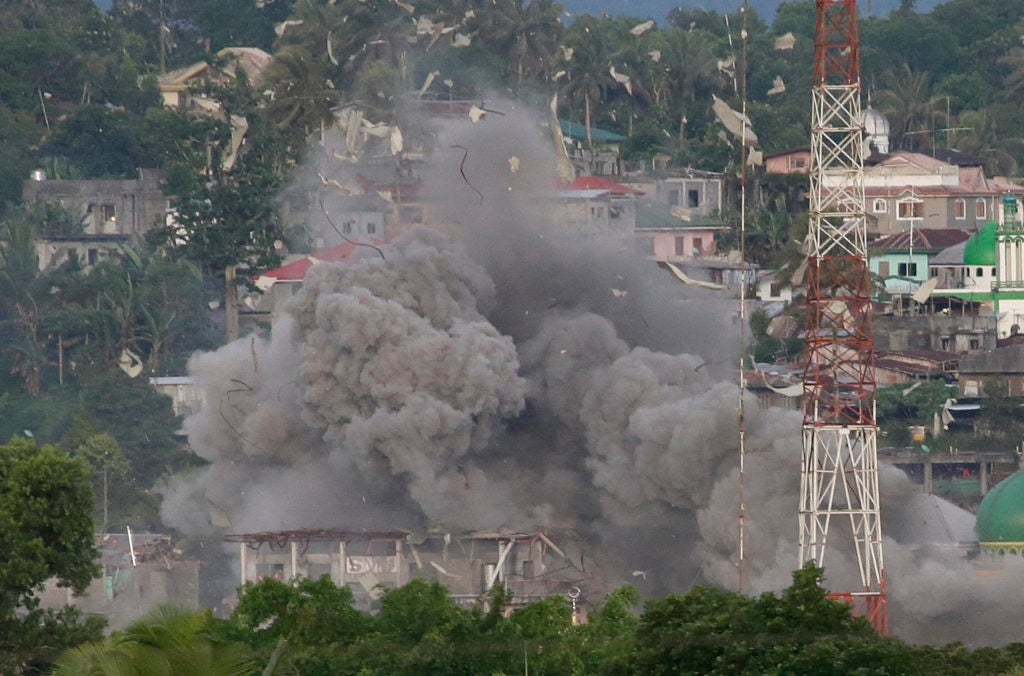 In this June 9, 2017 file photo, debris and smoke rises after a Philippine Air Force fighter jets bombed suspected locations of Muslim militants, in Marawi City. Its strongholds in Iraq and Syria slipping from its grasp, the Islamic State group threatened to make this year’s Ramadan a bloody one at home and abroad. With attacks in Egypt, Britain and Iran among others and a land-grab in the Philippines, the group is trying to divert attention from its losses and win over supporters around the world in the twisted competition for jihadi recruits. (AP Photo/Aaron Favila, File)

Its strongholds in Iraq and Syria slipping from its grasp, the Islamic State group threatened to make this year’s Ramadan a bloody one at home and abroad. With attacks in Egypt, Britain and Iran among others and a land-grab in the Philippines, the group is trying to divert attention from its losses and win over supporters around the world in the twisted competition for jihadi recruits during the Muslim holy month.

The militants insisted in their English language magazine this week that losing territory has only made it work that much harder to kill. The attacks since Ramadan’s beginning on May 26 show the sweep of the group’s ambition—from attacking the West, to expanding in the Philippines, to targeting Shiite powerhouse Iran—something al-Qaida itself never risked.

“They can say here is something that al-Qaida has refrained to do,” said Assaf Moghadam, an author and analyst of jihadi groups. “From their perspective it’s been a great Ramadan so far.”

But a powerful counter-message is emerging in recent days. With the month of fasting also a time of high television ratings in the Arab world, the telecommunications company Zain has launched a commercial that begins with footage of a man fabricating a suicide bomb. By the end, faced with bloodied victims and survivors of extremist attacks, the man stumbles and fails in his mission. “Let’s bomb delusion with the truth,” a man sings. The ad has been viewed more than 6 million times on YouTube. “We will counter their attacks of hatred with songs of love,” it ends.

The attack on Iran marked a new stage for the Islamic State group, which had threatened the Shiite-majority state repeatedly without actually striking it.

Five Islamic State group extremists battle-tested in strongholds Mosul and Raqqa simultaneously targeted the country’s parliament and shrine of late founder of the Islamic Republic Ayatollah Ruhollah Khomeini, killing 17 people. More than any of the other Ramadan attacks, the bloodshed in Iran shows the group’s violent attempts to persuade potential recruits it has the staying power to endure beyond the loss of its two major strongholds.

IS and al-Qaida, both radical Sunni groups, are competing for recruits in the global jihadi movement. Al-Qaida, however, has never attacked Iran. Founder Osama bin Laden had put the Persian state off-limits, citing and the country’s role as a conduit for arms and money.

Three men armed with knives plowed a rented van into pedestrians on London Bridge, then slashed their way through the evening crowd at Borough Market on June 3, killing eight people.

The man believed to be the group’s ringleader, Khuram Butt, had appeared in a documentary last year called “The Jihadis Next Door” and his neighbors said he was recruiting young people to join Islamic State. It was the third attack in Britain in three months claimed by the extremists.

Islamic militants in the Philippines aligned with the Islamic State group two weeks ago assaulted the southern lakeside city of Marawi, parts of which they occupy to this day, in a plot that they sketched in chilling detail on the back of a paper calendar. Among those at the table for the secret meeting was the purported leader of the Islamic State group’s Southeast Asia branch, Isnilon Hapilon, who is on Washington’s list of most-wanted terrorists and has a $5-million bounty on his head.

Masked Islamic State gunmen ambushed a bus carrying Coptic Christians to a monastery south of Cairo on May 26, killing 29 people on the eve of Ramadan. The group has singled out Egyptian Christians with ferocity, carrying out four attacks since December and warning of more to come. JPV