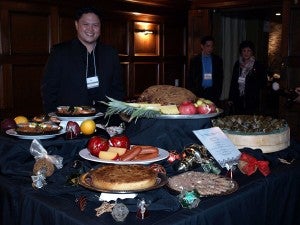 SOUTH SAN FRANCISCO—In the foodie’s paradise that is the San Francisco Bay Area where one can dine out everyday for years and not have to go to the same place twice, Intramuros has slowly but surely earned its rightful place the one Filipino Restaurant. Though not quite the destination restaurant yet that it could be to mainstream gourmands, it has become a favorite among local Filipinos and a place to bring visiting relatives and friends to show off how far Filipino-Americans and their restaurants have come.

Intramuros boasts of a main dining room that is both elegant and informal, with a gigantic capiz shell chandelier in the center above a grand piano for its focal point. To the right of the lobby is a well-appointed bar-lounge with a curving bar facing an array of carefully selected wines, cognacs, and whiskeys and barstool seating as well as comfortable lounge chairs where restaurant patrons can relax while waiting for their tables to be ready.

Prior to Ventura’s association with Intramuros, he was with the culinary team of Napa Valley’s Rubicon Estate, a premiere winery owned by Francis Ford Coppola. Ventura’s six collective years of culinary and hospitality experience in the California Wine Country gained him respect among his industry peers and he was ultimately invited to join the renowned Thomas Keller Restaurant Group (Yountville’s French Laundry, Bouchon Bistro and Ad Hoc Restaurant) in 2010. He then integrated and managed the now, “Central Reservations” sector of Bouchon and Ad Hoc restaurants.

Ventura graduated with honors from Guam Community College with Associates of Science degree in Hotel Operations. He pursued an undergraduate degree in International Business at Cornell University and graduated with honors. He was also granted a private scholarship to pursue Specialized Training in patisserie in New York’s French Culinary Institute. In 2007, he was awarded a Certified Executive Chef title, designated by the American Culinary Federation.

General Manager Jamil Rey said, “We are very proud to welcome Cocoy Ventura to Intramuros. His culinary expertise and management experience will ensure that Intramuros will have a bright future ahead.”

The evening was highlighted by guest speaker Dado Banatao, renowned entrepreneur, philanthropist, and venture capitalist. He and his wife Maria commended Intramuros Restaurant ownership for its efforts in providing an entertainment, cultural, and heritage venue for the Fil-Am community.

“I have always looked at Intramuros in a special way,” Banatao said in his keynote speech,  in reference to Intramuros’ unique mission of promoting the Filipino community and culture in a dining and entertainment environment. “There is a lot of creativity here, going beyond what is usual” and “Maria and I are here to help and promote Intramuros.”

He welcomed new executive chef Ventura by saying, “When I heard that Cocoy had joined Intramuros, I thought, let’s go ahead and show the community and the rest of the Bay Area what Filipinos can do with cuisine.”  In closing, he thanked everyone and said, “I’m glad that you guys came out (tonight) to support Intramuros…”