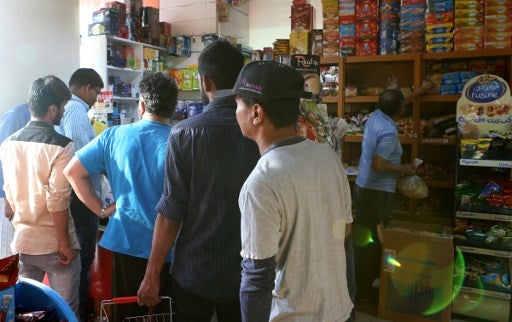 People buy snacks at a shop in Doha, on June 5, 2017. Saudi Arabia also closed its borders with Qatar, effectively blocking food and other supplies exported by land to Qatar after Arab nations including Saudi Arabia and Egypt cut ties with Qatar, accusing it of supporting extremism.  This is the  biggest diplomatic crisis to hit the region in years. Local media in Qatar reported there was already some panic buying as people stock up on food. / AFP PHOTO / STRINGER

MANILA — Labor Secretary Silvestre Bello III declared on Tuesday, a temporary deployment ban of overseas Filipinos workers (OFWs) in Qatar after its neighboring countries severed ties and closed their borders with the kingdom.

“Effective today, the deployment of Filipino workers to Qatar is suspended,” Bello said in a press briefing.

He said the suspension would take effect until they complete their assessment in Qatar on the safety of OFWs there.

“There have been wild rumors going around, but our labor attache there said there is no truth to such rumors. There is no food riot, but Filipinos were advised to prepare,” Bello said, adding that the suspension of deployment covered even Filipinos with complete paperwork now.

As of 2016, 141,000 documented OFWs have been staying in Qatar. Most OFWs in Qatar work as technicians, skilled and semi-skilled workers in services.

Asked how long the deployment ban would last, Bello said: “The assessment of Qatar and other Middle Eastern countries by the Department of Foreign Affairs will determine length of deployment ban.”

As of Tuesday, Bello said there were no plans yet to repatriate Filipinos but the Philippine Overseas Labor Office (POLO) unit was advised to stock food, water, and medicine. Qatar does not produce its own food, Bello has explained. SFM