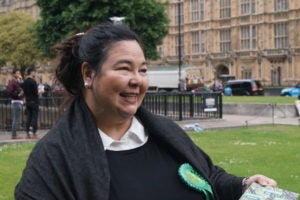 LONDON – Carmen Legarda, a British-Filipino who hails from Sampaloc in Manila, has made political history in the United Kingdom after becoming the first ever Filipino woman to be selected to run as a Member of Parliament in the upcoming general elections on June 8.

Representing The Green Party of England and Wales, Legarda is standing in the Hendon Constituency, in the London Borough of Barnet, which includes residents living in Burnt Oak, Colindale, Edgware, Hale, Mill Hill, Hendon Central and West Hendon.

The youngest of four sisters, Carmen Legarda was born in Sampaloc to Carmita Fernandez Legarda, the first ever Filipina woman to graduate from Oxford University, and actor Juan Antonio “Tony” Carrion, known for movies such as “American Ninja” and “Jose Rizal.”

At a young age, most of Legarda’s immediate family relocated to Oxford, England. Legarda later moved back to Manila during her high school years, going on to study psychology at the University of the Philippines in Diliman and Medicine at University of the East (Ramon Magsaysay).

Politics, however, has always been part of her heritage.

Her great grandfather, Benito Legarda, was a Filipino legislator who held various positions as cabinet member and vice president of the first Philippine legislature, before later becoming Philippine Resident Commissioner to the United States Congress.

Legarda’s grandmother, Trinidad Fernandez Legarda, was a suffragette, civic leader and diplomat – and was the first woman ambassador from the Philippines, appointed in 1958 to Vietnam.

Legarda’s eldest sister, Atty. Katrina Legarda, is a well-known lawyer, respected law professor and advocate for women and children’s rights in the Philippines. 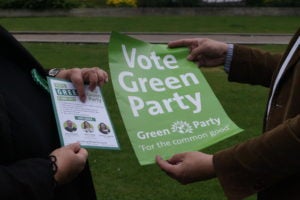 In 1997 Atty. Legarda famously won a child rape case against Romeo Jalosjos, a former Congressman, who was sentenced to prison for life (but later released by President Gloria Macapagal Arroyo after 13 years).

Human rights have always been a primary driver for Legarda, both professionally and in her personal life.

Although a fully qualified doctor, Legarda’s career has been in the field of Human Resources and People Management.

Over the past three decades, Legarda has worked for renowned international organisations including The British Council, Save the Children and the Methodist Church, and has delivered workshops and training on equal opportunities and diversity to senior management worldwide.

“I believe all human beings are equal,” Legarda wrote in her campaign statement. “As a woman, as a British citizen, as an ethnic person of Spanish-Filipino heritage, and as a Human Resources consultant who has worked in over 30 countries, I’ve experienced first-hand how our society labels and segregates, rather than unites.”

“I’ve chosen to run for MP because I have demonstrated leadership at a senior level throughout my career, and I am confident that I can deliver fair, able leadership on a national scale.”

The UK currently operates under a Conservative government led by Prime Minister Theresa May.

Legarda says she joined The Green Party because its values stand out in striking contrast to the disillusionment, deception, injustice, and exclusion that has so far occurred under the Conservatives.

“The Green Party is a party that cares, truly cares, about the wellbeing of ordinary people in our society. We tackle social issues that matter and are deeply committed to achieving social justice.”

Legarda, who lives in Hendon, an area notable for its Jewish community, is standing for Hendon because of the area’s rich cultural diversity.

UK Polling Report describes Hendon as “an ethnically diverse seat, with around a third of residents describing themselves as non-white.”

“As a woman and minority ethnic member of the community, I want to reach out to people from all walks of life,” says Legarda. “I can help inspire change and take action on community issues.”

Some of Hendon’s most severe issues includes pollution, burglary, and poverty.

“I love living in Hendon,” says Legarda. “I love walking through its beautiful parks. But Barnet Green Party’s monitoring of air quality found that levels of nitrogen dioxide vastly exceed legal limits with some areas at almost double the legal limit.”

Robberies are also rife in the area, with Legarda herself having been burgled within the first year of moving to the area.

“At a recent Town Hall meeting, when asked who had been burgled, every single person in the room had been a victim of burglary. I want more support for our police with better coordination between the community and the police so that we can tackle crime more effectively together.”

The Hendon area is undergoing rapid regeneration, with brand new developments being built on land where houses and local shops have been pulled down.

The problem with this, says Legarda, is that housing is unaffordable for the generations who want to live near their parents and grandparents.

Ultimately, Legarda says she is ready to initiate change and use her expertise for the common good.

Legarda adds, “If you’re registered to vote in the UK, please vote on June 8. The future of the UK depends on it.”