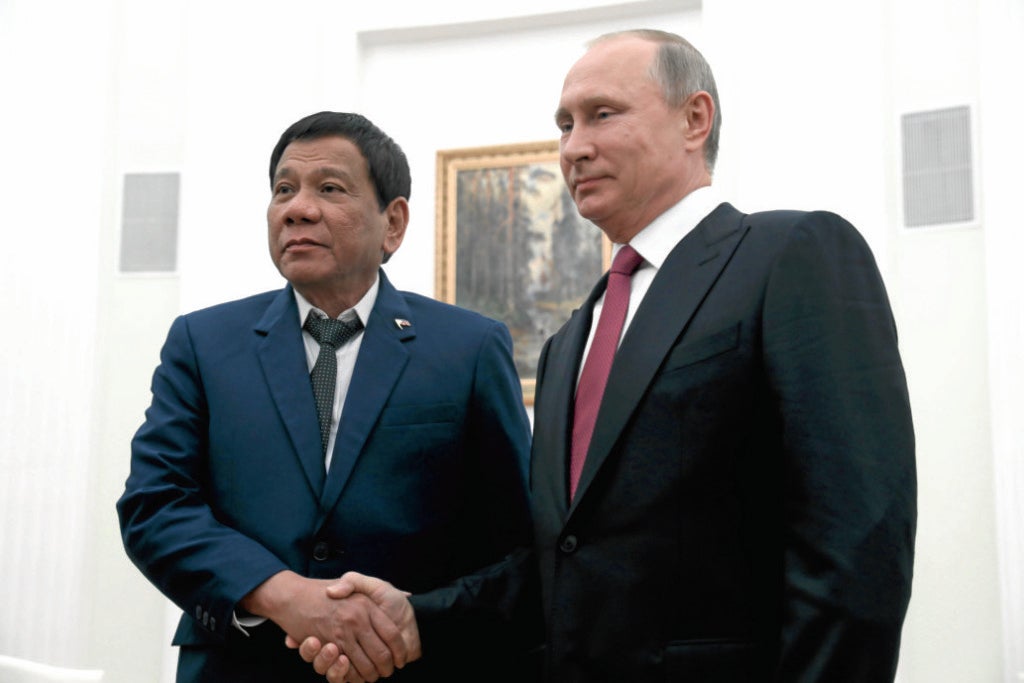 Cayetano, who joined Mr. Duterte in the discussions at the Kremlin on Tuesday evening, said the two leaders apparently admired each other.

“To describe the environment in the meeting, it was really a meeting of kindred spirits or of real brotherhood. You could feel the mutual trust and admiration. The discussions were very comprehensive,” Cayetano told reporters here.

Mr. Duterte again invited Putin to visit the Philippines, and the latter expressed his gratitude for the invitation. There is no confirmation, however, if Putin would actually go to the Philippines.

The two leaders previously met in international conferences in Peru and China.

Tuesday’s talk lasted an hour and a half and was hastily arranged after Mr. Duterte decided to cut short his Russia trip to attend to the terror attacks in Marawi, which had prompted him to declare martial law in Mindanao.

Putin had returned to Moscow that same night just to see Mr. Duterte, who had previously called the Russian leader his  “favorite hero.”

The initial plan was for the two leaders to just speak over the phone because Putin was not in Moscow, but the latter decided to head back there to see Mr. Duterte, said Cayetano.

“We thank His Excellency President Putin for most graciously adjusting his schedule. He flew back to Moscow and met with President Duterte,” he said.

He also said the meeting between the two Presidents covered the topics that were supposed to be taken up in their originally scheduled bilateral talks, as well as other matters that came up because of the terror threats.

Russia has extensive experience, expertise and knowledge in dealing with the Islamic State and terrorism, he said.

The two leaders also wanted to ensure that the cooperation and collaboration between the Philippines and Russia would be sustainable, he said.

Before flying home,  Mr. Duterte directed several of his Cabinet members to stay behind to ink agreements with the Russians.

Russia has a policy of noninterference when it comes to their allies and this is expected to sit well with Mr. Duterte, who had lashed out at expressions of concern from the United States and the European Union about the deaths in his brutal drug war.

‘That is our truth’: CEO debunks allegations vs ABS-CBN amid franchise row