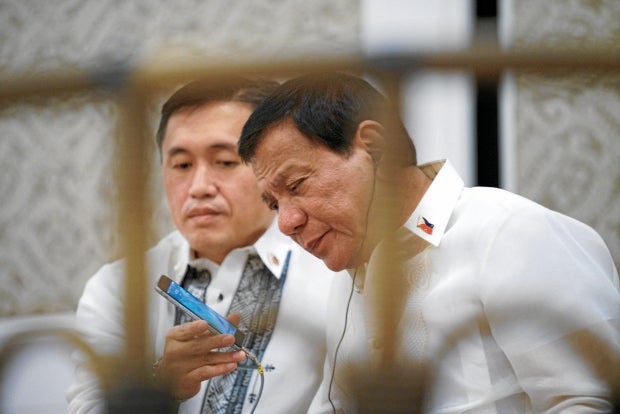 In this May 1, 2017 file photo, President Rodrigo Duterte speaks to US President Donald Trump, who invited him for a visit to the White House in a phone call made on the sidelines of a gala dinner hosted by the Philippine leader for heads of states of the Association of Southeast Asian Nations. (Photo from Malacañang)

MOSCOW, Russia — Foreign Affairs Secretary Alan Peter Cayetano has ordered an investigation to check if the transcript of President Duterte and United States President Donald Trump’s phone conversation had been leaked from the Department of Foreign Affairs.

The Washington Post had published the copy of the transcript of the two leaders’ exchange, which indicated that it came from the DFA’s Office of American Affairs.

The transcript showed them discussing North Korea and Trump praising Mr. Duterte for his war against drugs.

“I ordered a discreet investigation, internal investigation to see if in fact there was a leak or not,” Cayetano told reporters in Moscow, later adding that the probe would not be discreet anymore since he had announced it publicly.

He added he has ordered the holding of seminars in the DFA on how to handle documents, information and data such as confidential transcripts of meetings between heads of state.

“Remember, the security when it comes to the digital age is different,” he said.

“So it’s also possible that it wasn’t leaked but someone has the capability of intercepting electronic transfer of data,” he added.

He said he had not read the transcript and so could not confirm or deny its contents.

At the same time, Cayetano appealed to the media’s “sense of patriotism and responsibility” when dealing with this kind of information.

“We respect the freedom of the press but also we’re calling for self-restraint in certain matters, diplomatic matters when negotiations are involved and also operational security when it comes to police and military operations,” he said.

He said that when dealing with military operations and diplomacy, a lot of privileged information would be handled.

“So when information is leaked ahead of time or unnecessarily, it sometimes limits our ability to do our jobs as diplomats,” he added.

He emphasized the need to keep certain information under wraps because of operational security, and expressed hope the members of the press would understand this, he said.

He said that in instances when government scrimped on information released to the public, it did not intend to undermine transparency but only protect “lives that are at stake.”  SFM