MOSCOW, Russia — President Duterte is now in Moscow for his landmark four-day visit to Russia.

Mr. Durerte touched down at Vnukovo Airport past 11 pm on Monday evening (early Tuesday in Manila).

Mr. Duterte will have private time on Tuesday before beginning his official activities in Moscow and St. Petersburg from Wednesday to Saturday.

Among the activities on his schedule are meetings with Russian President Vladimir Putin and Prime Minister Dmitry Medvedev.

Mr. Duterte is a vocal admirer of Putin, whom he had met twice in international gatherings in Peru and China.

The President will also appear at the Moscow State Institute of International Relations on Wednesday where he will receive an honorary doctorate and deliver a policy speech.

Meetings with the business community and the Filipino community are likewise on his agenda. 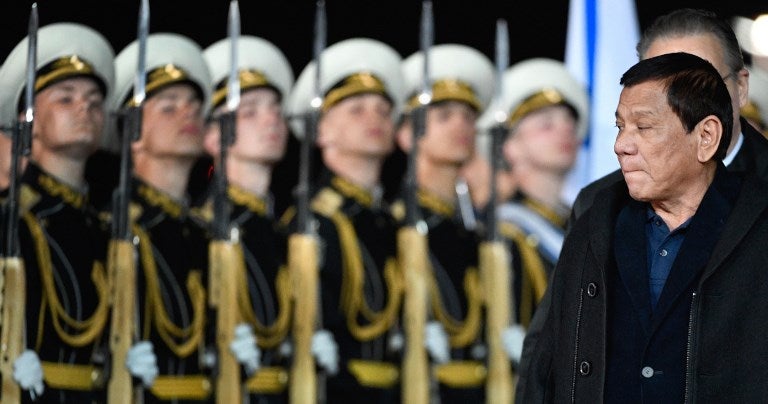 The Department of Foreign Affairs has described Mr. Duterte’s Russia trip, which is upon the invitation of Putin, as a landmark visit seen to revitalize modest relations between Moscow and Manila.

DFA Assistant Secretary Cleofe Natividad earlier said that despite 40 years of diplomatic relations, “our bilateral engagement is still, we can say, at a nascent stage in practically all areas of cooperation.”

In the past, Natividad said, there had been “no great impetus to strengthen” Philippine partnership with Russia, and credited Mr. Duterte with the move to diversify and strengthen the Philippine ties with other countries.

Philippine-Russia relations could be described as “cordial albeit modest in scope and depth,” she said.

She also said Russia is expected to pull out all the stops for Mr. Duterte’s visit. She noted that he had been invited to Moscow as early as January, but his schedule had been full, and he also wanted to wait for better weather in Russia before visiting. CBB/rga