Duterte off to Russia in blow to US

DAVAO CITY—Self-styled socialist President Duterte flew to Russia on Monday to meet his hero, seek arms and steer the Philippines’ foreign policy course further away from its longtime ally, the United States.

The five-day trip will cement a dramatic improvement in ties between the two nations since Mr. Duterte came to power last year and began unraveling the Philippines’ decades-long alliance with the United States, which he accuses of hypocrisy and bullying over Washington’s criticism of his brutal war on drugs.

On Thursday, Mr. Duterte will meet Russian President Vladimir Putin, whom he has described as his “favorite hero” and proclaimed a personal bond with because of mutual passions such as guns and hunting.

Mr. Duterte said on Friday that one of the top priorities of his trip was to secure Russian precision-guided bombs to use on Islamic militants in Mindanao.

“If they can spare us the precision-guided [bombs],” he said. “We have so many smart bombs but not as accurate.”

Mr. Duterte’s seeking weapons from Russia comes as he dials down cooperation with the United States, which for decades has been its most important military ally and protector.

He has scaled down the number and scope of annual joint military exercises with the United States, barred Filipino forces from joint patrols in the disputed South China Sea and called for the withdrawal of US troops from the Philippines.

The shift occurred as China has become more assertive in challenging US might in the region by expanding its presence in the South China Sea, which it claims almost in its entirety.

Despite China’s expansionism extending into areas of the sea claimed by the Philippines, Mr. Duterte has been determined to pivot his nation’s foreign policy away from Washington in favor of Beijing and Moscow.

This has partly been due to China and Russia supporting or at least not criticizing his bloody war on drugs, which has left thousands of people dead and led to warnings by rights groups that Mr. Duterte may be orchestrating a crime against humanity.

Speaking at a news conference at Francisco Bangoy International Airport here before his departure for Moscow on Monday, Mr. Duterte described his trip as highlighting the Philippines’ “independent foreign policy,” which seeks to broaden friendship and cooperation with other nations.

Traveling with Mr. Duterte is a large delegation composed of Cabinet officials and businessmen.

“It is a high-level delegation befitting the level of importance my government places on writing a new chapter of Philippines-Russia relationship,” Mr. Duterte said.

He said he would meet with Putin and Prime Minister Dmitri Medvedev for discussions of “ways of charting the future direction of our partnership across many areas.”

“This visit is most anticipated, having been the product of my previous meeting with [Medvedev] in Laos and with [Putin] in Peru and most recently in Beijing,” he said.

He said his trip would seek to further improve relations between Moscow and Manila since the “doors of cooperation” were only “slightly opened 40 years ago,” a reference to the establishment of formal relations between the two nations in 1976.

“There is much room to develop mutually beneficial cooperation. There are many opportunities that needed to be explored. Now we can work together to open those doors even wider,” he said.

Mr. Duterte said the Philippines needed to extend relations with nontraditional allies such as Russia for “opportunities for cooperation that cannot be ignored.”

“Russia must cease to be at the margins of Philippine diplomacy. Overdependence on traditional partners has limited our room to maneuver in a very dynamic international arena. This is a strategic oversight that has led to many missed opportunities for our country. I am determined to correct this,” he said.

The President was expected to arrive in Moscow late Monday.

Among the Cabinet officials traveling with him are Foreign Secretary Alan Peter Cayetano and Assistant Presidential Communications Secretary Mocha Uson. 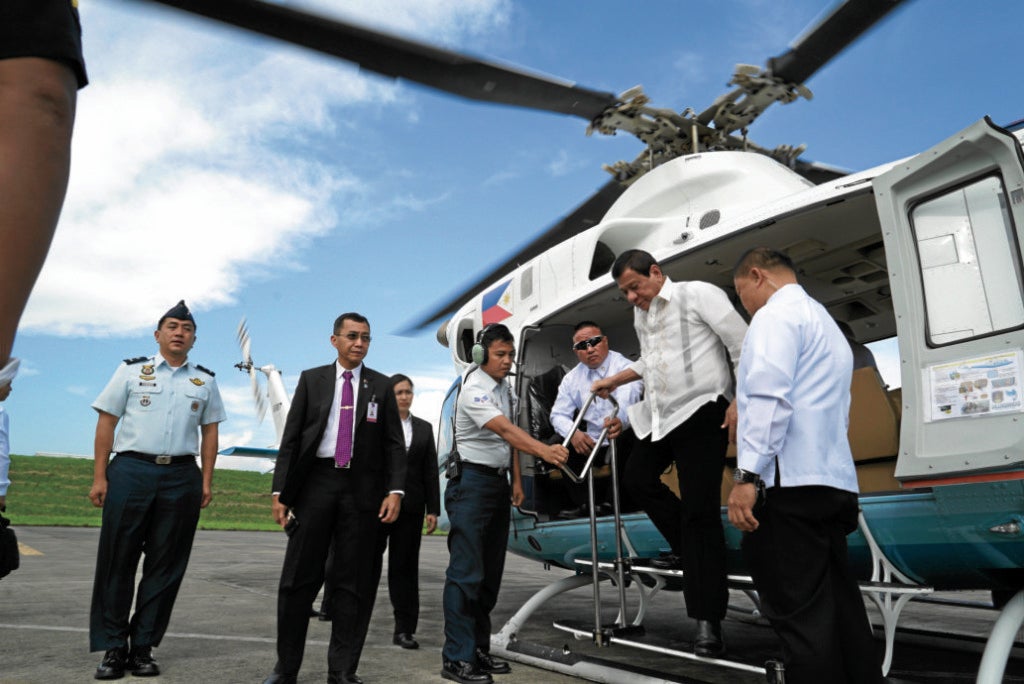 Mr. Duterte will discuss his independent foreign policy in a speech at Moscow State Institute of International Relations on Wednesday, according to the Department of Foreign Affairs (DFA).

The DFA said Mr. Duterte might also discuss his ideas of achieving peace and security in the Asia-Pacific region.

After his speech, Mr. Duterte will have a dialogue with students and donate books to the institute’s library.

Mr. Duterte will also receive an honorary doctorate from the institute, despite his reluctance to accept such awards.

In April, he turned down a honorary doctor of laws degree offered by the University of the Philippines.

Moscow State Institute of International Relations is an elite institution for diplomatic training and international relations, the DFA said.

President Fidel Ramos received an honorary doctorate from the institute in 1997.

Among the other recipients of honors from the institute are French President Nikolas Sarkozy, Kyrgyzstan Foreign Minister Erlan Abdyldaev, UN Secretary General Ban Ki-moon and financier and philanthropist George Soros.

Mr. Duterte will lay a wreath at the Tomb of the Unknown Soldier at Alesandrovsky Sad before speaking at the institute.

On the same day, he will join the Philippine-Russian Federation CEO Roundtable.

The President will address the Filipino community in Moscow on the same day.

He will also have in interview with Russian TV.

On Friday, the President will leave the Russian capital and fly to St. Petersburg, where he will be welcomed to the Smolny Palace.

A visit to the Admiralty Shipyard is next on his schedule, to be followed by his attendance in the Philippines-Russia Business Forum.

“With the Philippines’ emphasis on sustaining economic growth, we seek responsible economic partners who will become our new allies in development,” Mr. Duterte said.

He will leave Russia on Friday evening. —WITH A REPORT FROM AFP