Cayetano to meet with senators, Carpio on China’s ‘war’ warning 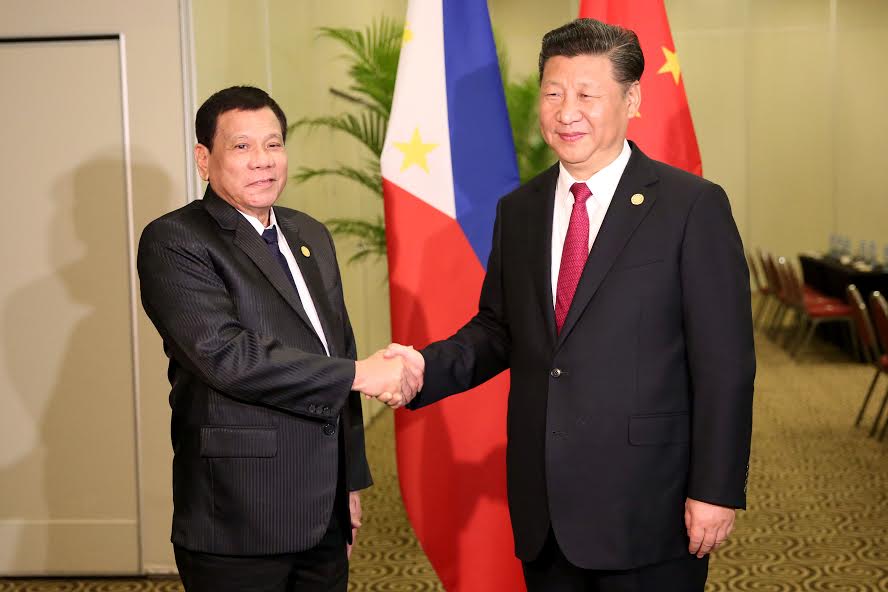 President Rodrigo Duterte and Chinese President Xi Jinping greet each other during a bilateral meeting at the sidelines of the Asia-Pacific Economic Cooperation (APEC) Leaders’ Summit in Lima, Peru on Nov. 19, 2016. (Presidential photo by REY BANIQUET)

MANILA — Foreign Affairs Secretary Alan Peter Cayetano has expressed confidence that senators calling for the filing of a diplomatic protest against China over its threat of war against the Philippines would change their minds once he has briefed them on what was exactly discussed in the meeting between President Duterte and Chinese President Xi Jinping.

At a press conference on Monday, Cayetano also said he would seek a meeting with Supreme Court Associate Justice Antonio Carpio after his trip to Russia.

Over the weekend, Carpio urged President Duterte to take China to the United Nations for threatening the country with war if it drilled for oil in the disputed islands on West Philippine Sea (South China Sea).

He said the conversation between Duterte and Xi was very frank, marked with mutual respect and trust.

“There was no language or even tone that would lead any of the two presidents to believe that there was disrespect for them or their country,” Cayetano told reporters before departing for Russia with Mr. Duterte.

The newly appointed DFA chief, who was present at the meeting of the two leaders that took place in Beijing during the President’s visit to China last week for an international trade conference, neither confirmed nor denied whether the word “war” cropped up in the discussions.

“You have to look at the context [of the conversation]. The context was about conflict resolution, not threatening each other but how to stabilize the region and how to prevent conflict,” he said.

On Friday, Mr. Duterte disclosed that Xi warned him of war if he insisted on drilling for oil in the South China Sea, apparently referring to Recto Bank.

But Cayetano said the President must have made such statement “because he was being barraged by comments of what he should do” in protecting the country’s territorial rights.  SFM