globalnation /
GEOGRAPHY NOT AN ISSUE?

Duterte to sponsor entry of Turkey, Mongolia into Asean 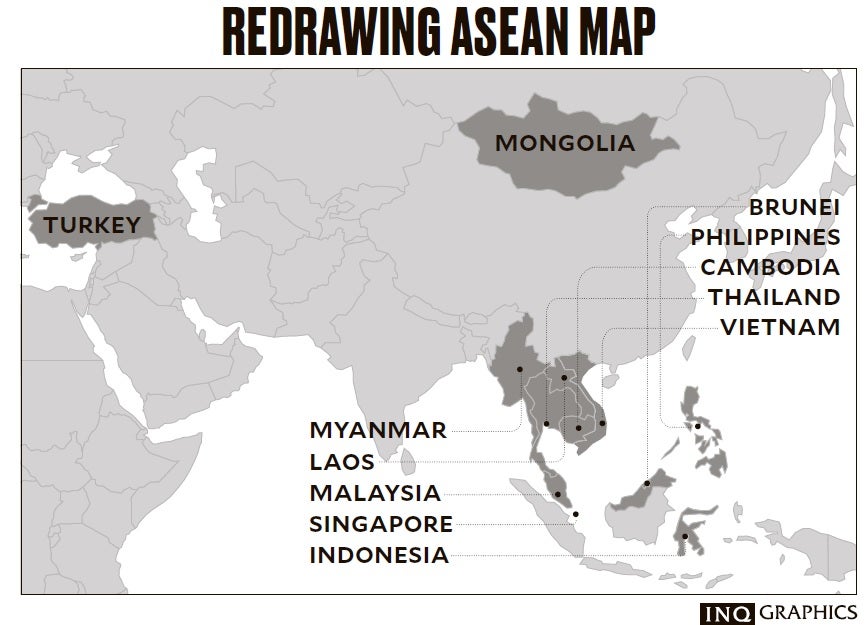 President Duterte wants to redraw the map of Southeast Asia to include two faraway countries—one straddling Europe and Asia and bordering the Middle East, the other sandwiched between China and Russia in the north.

On his return from China on Tuesday, Mr. Duterte told a news briefing at the Davao City Airport that he would push for the inclusion of Turkey and Mongolia in the 10-member Association of Southeast Asian Nations (Asean).

He dismissed concerns about the two countries’ geographic location, but did not say why he thought they could be admitted to Asean.

Mr. Duterte has shown a fondness for making people laugh. On Feb. 8, speaking to employees of the Bureau of Customs, Mr. Duterte said: “Of the five things I say, only two of those are true. The three others are just foolishness. And so I’m fond of doing it. I just want to laugh … at the expense also of myself sometimes.”

On Tuesday, however, he appeared serious as he talked to reporters.

He said leaders of Turkey and Mongolia told him about their desire to join Asean while they were in China over the weekend for the new Silk Road conference, a summit on a global trade infrastructure project.

“They want to join Asean and since I am now the chair—the Philippines is—they wanted me to sponsor their entry and I said, ‘Yes, why not,’” Mr. Duterte said.

Geographic location is the first criterion for Asean membership, along with recognition by all members.

A Nato member bordering the Middle East, Turkey straddles Europe and Asia. Its application for membership in the European Union has been bogged down for years.

Mongolia is a landlocked nation wedged between China and Russia.

Mr. Duterte said Myanmar State Councilor Aung San Suu Kyi, who also attended the conference in Beijing, asked him if he had considered geography in deciding to sponsor Turkey and Mongolia’s Asean membership.

“Have you considered the physical, the geography, whether they are part of Asean or not?” Mr. Duterte quoted Suu Kyi as saying.

He insisted the two nations were part of the region.

“They are. I would say that they are,” Mr. Duterte recalled telling the de facto leader of Myanmar.

Asked about Mr. Duterte’s remarks, the Asean Secretariat in Indonesia said Turkey and Mongolia had “never applied” to the bloc for membership.

Countries within the region like East Timor and Papua New Guinea have for years sought Asean membership but only hold observer status. —WITH A REPORT FROM AFP