President Duterte on Tuesday said that he was open to exploring the resources of the South China Sea with rival claimants China and Vietnam, contradicting Foreign Secretary-designate Alan Peter Cayetano, who said on Sunday that joint exploration was not a direction for the Philippines in the resolution of disputes in the strategic waterway.

Mr. Duterte also said he had no immediate plans to pressure China over an international tribunal’s ruling last year that its claim to almost all of the South China Sea was baseless.

“If we can get something there with no hassle at all, why not?” Mr. Duterte said at a news briefing in Davao City after his arrival from Beijing, where he attended a new Silk Road conference with leaders and representatives of 28 other countries.

Mr. Duterte was asked about a proposal for jointly exploring the waters of the Spratly Islands with China and Vietnam.

“Let us see the wherewithals. I will check first if I won’t be disadvantaged. It has to be fair and it has to be balanced,” Mr. Duterte said.

The Philippines and China open talks on the resolution of their dispute in the South China Sea this week.

Ahead of the consultations, Philippine Special Envoy for Intercultural Dialogue Jose de Venecia Jr., speaking at the opening of the new Silk Road conference on Sunday, proposed a three-way energy exploration effort at the disputed Spratly Islands among the Philippines, Vietnam and China.

De Venecia, a former Speaker of the House of Representatives, said that such an effort would promote peace and economic development.

But Cayetano, speaking to reporters on Sunday night, dismissed De Venecia’s remarks as his own view.

“If you look at the statements of former Speaker De Venecia when he was still Speaker, he is consistent with those kind of ideas,” Cayetano said.

“But that doesn’t mean that that’s the direction of the government because we are bound by the Constitution and our own law,” he said. 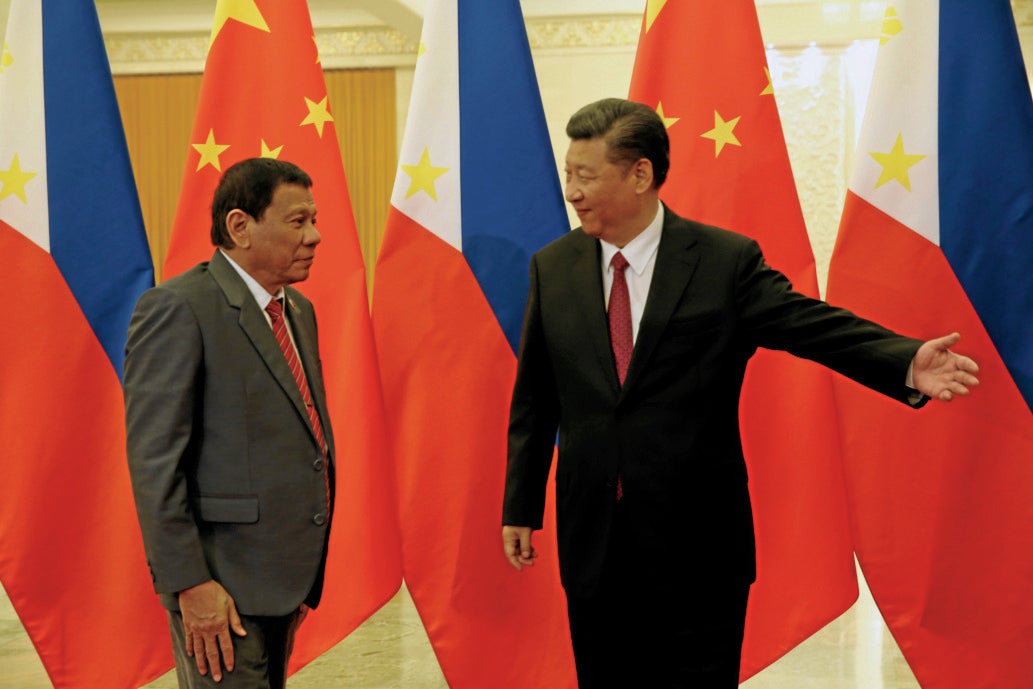 Asked whether he believed a joint exploration was unconstitutional, he replied, “I’m saying that is [former] Speaker De Venecia’s proposal as of now.”

China claims almost the entire South China Sea, including waters close to the shores of smaller neighbors in the region.

The Philippines, Brunei, Malaysia and Vietnam, as well as Taiwan, have competing claims in the waterway, through which $5 trillion in shipborne trade passes every year and where islets, reefs and atolls are believed to be sitting atop vast energy reserves.

Mr. Duterte did not mention the other claimants in his talk with reporters on Tuesday.

The competing claims to territory in the South China Sea have for decades made it one of Asia’s potential military flash points.

Last year, in a ruling on a challenge brought by the Philippines, the UN-backed Permanent Court of Arbitration in The Hague said China’s claim to almost all of the South China Sea had no basis in international law and declared Beijing had violated Manila’s right to fish and explore resources in the West Philippine Sea, waters in the South China Sea within the Philippines’ 370-kilometer exclusive economic zone. 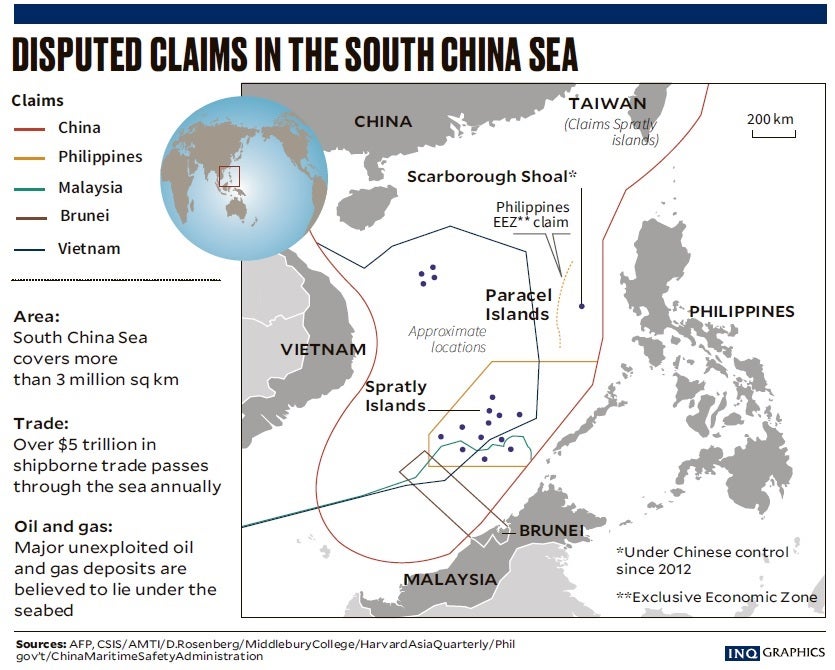 He said his decision had earned the Philippines billions of dollars in Chinese investments and aid.

Mr. Duterte and Chinese President Xi Jinping held bilateral talks on the sidelines of the new Silk Road conference, during which they resolved to strengthen their countries’ friendship.

Mr. Duterte said he told Xi and Chinese Prime Minister Li Keqiang that he would not raise the tribunal’s ruling.

“We decided that there is a time for me to ask about the ruling but it is not now,” Mr. Duterte said at his news conference on Tuesday.

He said both he and Xi were looking forward to their official meeting later this week for inaugural bilateral talks on the South China Sea as a step toward peacefully managing their territorial dispute. —WITH REPORTS FROM ROY STEPHEN C. CANIVEL, AFP AND AP