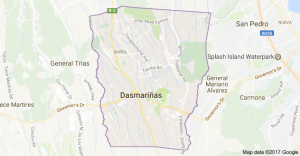 The Korean national Kwaung Yhul Heo, 46, a resident of Greensite Subdivision in Barangay Sampaloc 2, was reportedly drunk when he went to a wake in the village and tried to attack the mourners with a bladed weapon at around 12:30 a.m., a report from the Cavite police said. The Korean, however, did not hurt anyone.

The commotion called the attention of the village watchmen and prompted watchman Juanito Serna to shoot the foreigner on the leg.

Serna remains at large after he escaped.  SFM