BEIJING — President Rodrigo Duterte revealed Tuesday that Turkey and Mongolia were interested to be part of the Association of Southeast Asian Nations (Asean).

Duterte on Sunday had bilateral talks with Prime Minister Jargaltulgyn Erdenebat and a pull aside meeting with Turkish President Tayyip Erdogan during the leaders’ roundtable session at Yanqi Lake here. Duterte was here for the two-day Belt and Road Forum.

“By the way, I had a talk with the President Erdoğan and the Prime Minister si Erdenebat sa Mongolia. They also want to… Gusto nila mag-sali sa Asean,” he told reporters in a press briefing right after he arrived in Davao City.

“And since I am now the chair, ang Pilipinas ngayon, they wanted me to sponsor their entry and I said, “Yes, why not?” he added. 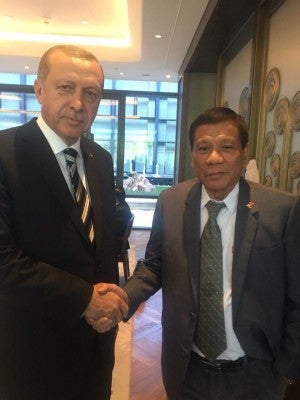 President Duterte meets Turkish President Tayyip Erdogan at the sidelines of the the leaders’ roundtable session of the Belt and Road Forum at the Yanqi Lake in Beijing, China. PHOTO FROM SPECIAL ASSISTANT TO THE PRESIDENT CHRISTOPHER GO.

“Have you considered the physical — the geography whether they are part of the Asean or not?” he said, quoting the Myanmar leader.