BEIJING—President Duterte on Monday reassured Chinese President Xi Jinping that the Philippines would seek a peaceful resolution of its territorial dispute with China on the South China Sea.

Mr. Duterte and Xi held a bilateral meeting in the Great Hall of the People after the two-day Belt and Road Forum for International Cooperation here.

Mr. Duterte said the Philippines and China would start bilateral talks on May 19 to settle their dispute.

“It is important to keep our communication lines open. I am pleased that we have established a bilateral consultation mechanism on the South China Sea. This is one step forward toward peacefully engaging disputes and I hope the inaugural meeting will be a success,” Mr. Duterte told Xi.

Earlier on Monday, Sen. Alan Peter Cayetano, the incoming secretary of the Department of Foreign Affairs (DFA), steered the Philippines away from a call for joint exploration and development in the Spratly Islands made by the agency’s special envoy during the opening of the new Silk Road conference here on Sunday.

In a press conference on Sunday night, Cayetano dismissed the remarks of Jose de Venecia Jr., saying the DFA special envoy for intercultural dialogue was speaking in his personal capacity.

De Venecia was introduced to participants in the Belt and Road Forum for International Cooperation as the DFA special envoy and former Speaker of the Philippine House of Representatives.

He said in his speech that China, Vietnam and the Philippines—which previously made a joint seismic survey of the Spratly group of islands in the middle of the South China Sea—should seek peace and tap the hydrocarbon potential of the area.

“If you look at the statements of former Speaker De Venecia when he was still Speaker, he is consistent with [those] kind of ideas,” Cayetano told reporters.

“But that doesn’t mean that that’s the direction of the government because we are bound by the Constitution and our own law,” he added.

Cayetano, however, stopped short of saying joint exploration with other countries for resources in Philippine waters would violate the Constitution.

When asked to categorically say if he thought it was unconstitutional, Cayetano said: “I’m saying that is [former] Speaker De Venecia’s proposal as of now.” 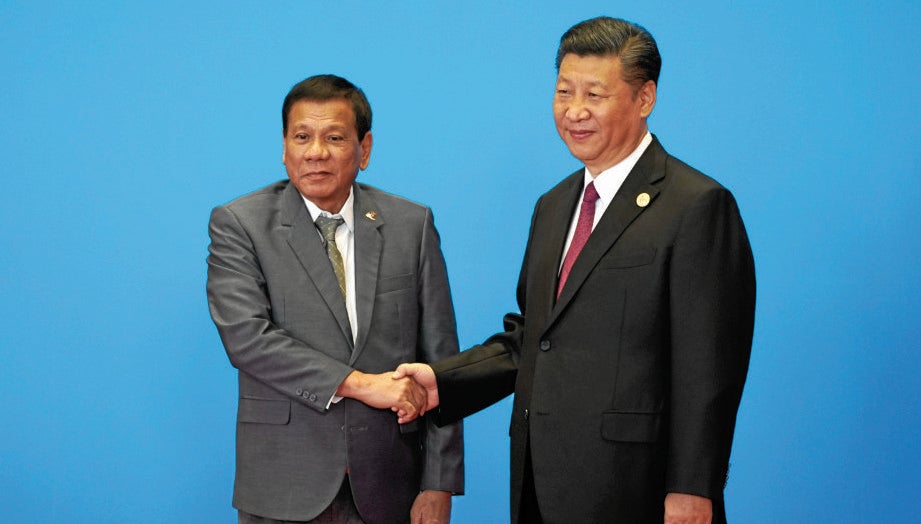 China claims most of the energy-rich South China Sea, through which about $5 trillion in shipborne trade passes every year.

Besides the Philippines, Vietnam and China, Brunei and Malaysia have claims in the South China Sea.

Cayetano said De Venecia “did not need” to consult the DFA before making the statement.

“He did not need to because he’s an eminent person. He is just like President FVR (Fidel V. Ramos),” Cayetano said.

He clarified that he was not speaking on behalf of the DFA but as chair of the Senate committee on foreign relations.

President Duterte appointed Cayetano, his defeated vice presidential running mate, to head the DFA last week to replace Perfecto Yasay Jr., whose nomination was rejected by the Commission on Appointments on March 8 because of his uncertain citizenship.

China and the Philippines have been improving their relations since the election last year of Mr. Duterte, who has put on a “separate” track the territorial dispute between the two countries to ease tensions and lure Chinese investment to the Philippines.

Supreme Court Senior Associate Justice Antonio Carpio has warned that Mr. Duterte would risk impeachment if he entered into any deal with China that meant giving up Philippine sovereignty over its territories in the South China Sea./rga