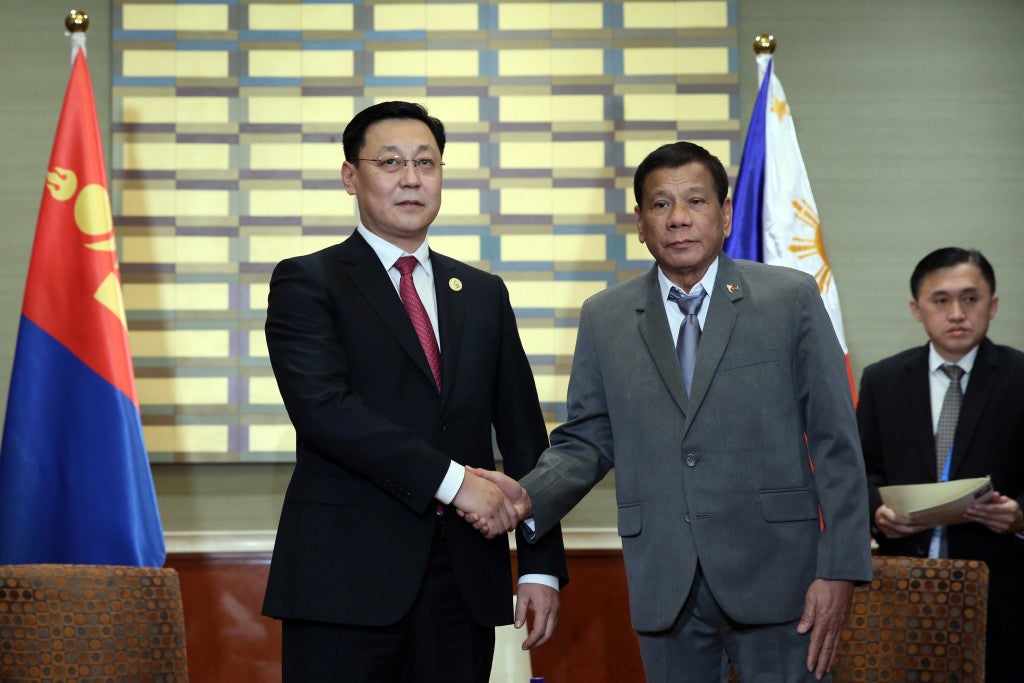 President Rodrigo Roa Duterte engages in a discussion with Mongolian Prime Minister Jargaltulgyn Erdenebat during the bilateral meeting held at the Grand Hyatt Hotel in Beijing, China on May 14, 2017. PRESIDENTIAL PHOTO

In a “warm and cordial first meeting,” Duterte and Erdenebat “expressed their satisfaction with the development of bilateral relations and pledged to further enhance economic and people-to-people cooperation between the two countries.”

“The two leaders exchanged views on expanding interaction in many areas, including in agriculture, trade and investment, finance, and tourism, among others,” Malacañang said in a press statement.

Both leaders agreed that senior officials should visit each other’s country to expand political, economic, and cultural ties.

The Palace said Erdenebat “looked forward to convening the next round of consultations in order to review and strengthen the cooperation of the two sides.”

In an interview with reporters here, Trade Secretary Ramon Lopez said the Philippines and Mongolia has no existing trade agreement.

Lopez said the talks were more of an “exploratory” discussion on possible partnership on mutual interests.

Duterte and Erdenebat both expressed their desire to visit each other’s country at a mutually convenient date.

During their talks, Duterte talked about regional developments, saying “peace is better served when there is more participation by stakeholders in the region.”

“As Chair of ASEAN in 2017, President Duterte also welcomed Mongolia’s growing ties with the region. The President thus felt that closer partnership with ASEAN, including Mongolia’s possible membership, would be desirable, and he said that he would take up the matter with ASEAN leaders,” Malacañang said.

More than 200 overseas Filipino workers (OFWs) are currently working as professionals in Mongolia.

Philippine Ambassador to China Jose Santiago Sta. Romana told reporters he was optimistic that the talks between Duterte and Erdenebat would pave the way for a visa-free entry for Filipinos in Mongolia.

Aside from Erdenebat, Duterte is also set to have bilateral talks with China’s President Xi Jinping and Premiere Li Keqiang on Monday. JE