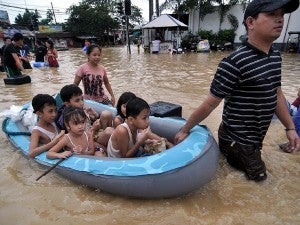 Children are on board an inflatable boat as they are being rescued in Calumpit, Bulacan after it submerged in floodwaters spawned by Typhoon Pedring. RICHARD REYES/INQUIRER

MANILA, Philippines—Criss-crossed by active faults and located in the “bulls-eye” of storms, the Philippines is the world’s third “riskiest” country and is more vulnerable to rising sea-levels, subsiding land and warming temperatures than Solomon Islands in the Pacific Ocean.

Ma. Antonia J. Yulo Loyzaga, executive director of the Manila Observatory, painted this grim scenario during her talk on the Philippines’ increasing vulnerability to disasters and climate change in Makati City on Tuesday.

Loyzaga said 50 million schoolchildren are exposed to earthquake hazards while 15 million residents in coastal towns are vulnerable to rising sea-levels.

“All of these natural hazards are making us the prime laboratory for the study of disasters all over the world,” Loyzaga said in her lecture “2012: A Practical Guide to Disaster Risk and Preparedness” at the Ateneo de Manila University Professorial Schools at the Rockwell Center.

Her talk was part of the 10th Jaime V. Ongpin Annual Memorial Lecture on Public Service in Business and Government.

The United Nations University released a study this year showing the Philippines as the world’s third riskiest country “because of lack of coping capacity,” behind Tonga and Vanuatu, said Loyzaga, who was recently appointed to the Science and Technology Committee for the Unesco’s National Commission.

“We’re even riskier than Solomon Islands,” she told the audience that included climate experts, academicians, business leaders, and students.

Other foreign studies were more telling and more precise on the number of vulnerable Filipinos, Loyzaga said in her PowerPoint presentation.

In a 2007 study, the Columbia University estimated that at least 15 million Filipinos live in low lying coastal areas or 10 meters below sea-level, she said.

“So this has implications for sea-level rise, but also for tsunami, which of course we are at risk to all over the country, both internally and externally generated,” she said. She added that the country was also subsiding in “major coasts.”

In another study after the powerful May 2008 earthquake in Sichuan, China, the Columbia University also estimated that some 50 million Filipino schoolchildren were exposed to earthquake hazards, even topping India and China, according to Loyzaga.

“If you look at the chart, the largest figure is 10 million. The Philippines exceeds that,” she said. “What we’re trying to do is explain to the DepEd (Department of Education) … It’s fairly simple to pick up the fault map of the Philippines from the Phivolcs (Philippine Institute of Volcanology and Seismology) and superimpose the coordinates of all public and private schools. This will give us an indication of where we must be most careful as far as protecting our school-age children,” she said.

If an earthquake were to happen during classes at daytime, “we will have a massive problem as far as rescuing children, much like the Sichuan earthquake,” she added.

Citing researches by the Manila Observatory, Loyzaga showed slides of warming temperature in the archipelago in the coming years that would impact on the country’s food security.

“Rice blooms at night and there are studies from the IRRI (International Rice Research Institute) that a 1-degree change in minimum temperature will lead to a 10-percent decrease in rice yields. The country is getting hotter and this has implications for own food security,” she said.

She also said that northern Luzon would experience more rains this year, while the “rest of the country dry up.”