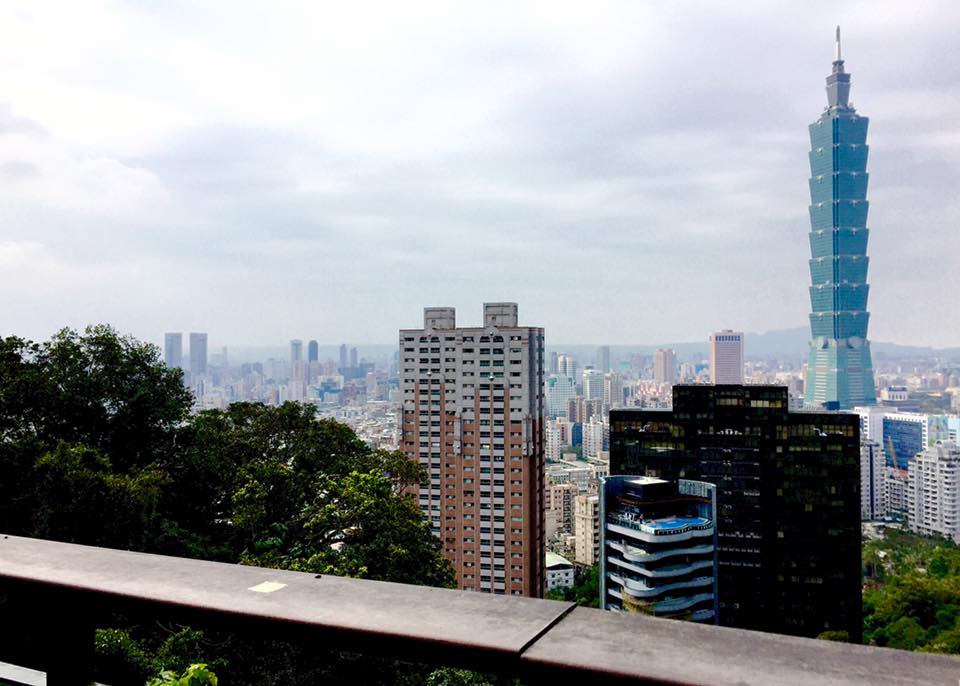 The iconic Taipei 101 as seen from Elephant Mountain. DON LEJANO/INQUIRER.net

TAIPEI —She still goes home to her hometown Baguio City each year, where her children love to go horseback riding, or to eat palabok at Jollibee.

But Angie Tan’s face lights up when she talks about the prospect of her children learning Filipino here in Taiwan.  “Alam mo naman ang mga bata, ang natatandaan lang nila yung mga bad words, katulad ng pangit (You know, the children, they only remember the bad words, like the word ugly),” she said. She recalled how, while her children were growing up, she could not force them to speak only pure Filipino when they had to deal every day with words in Chinese and English.

But for the first time this year, Tan is helping design a curriculum for the teaching of Filipino as second language in Taiwan.  Taiwan’s Ministry of Education targets to offer the course in 2019 to children of Filipino immigrants studying here.

The move is part of Taiwan’s new southbound policy, which seeks to strengthen ties with peoples in Southeast Asia, by sharing resources, talents and markets.  While Filipino workers make up the second largest migrant workers in Taiwan, the government here is also looking at a large part of these migrant workers who have come to marry and live in Taiwan, as a way of establishing lasting ties with Southeast Asian neighbors.

President Tsai Ing-wen said the new policy will link the children back to their culture, so that, in the future they can be a future link for Taiwan and their homeland. “We have so many people working here already from Southeast Asia, and they’re good workers and we appreciate a lot that they’re here,” she said. “The culture is very different from ours and this makes our place more diverse, and we appreciate it a lot,” she said, responding to a question from a journalist from Indonesia. “We are very appreciative of these people here, hopefully this will go on and we get more students to come here from Southeast Asia and they can participate in our industries and they can get practical training so that at the end of the day, they can function here and at the end of the day, they can serve as our bridges to Indonesia.” 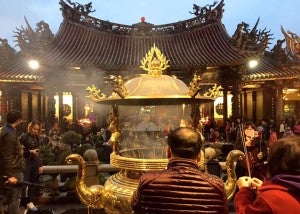 Longshan Temple is the oldest Buddhist temple in all of Taiwan. DON LEJANO/INQUIRER.net

Although the past southbound policies of Taiwan emphasized developing markets and short-term business opportunities, the new southbound policy—which covers 18 countries in Southeast Asia, South Asia, New Zealand and Australia—aims for a long-term policy agenda that put people at the heart of what it does, President Tsai said. Barely nine months after she announced the new southbound policy in August last year, trade volume between Taiwan and south bound countries increased by 20.33 per cent, Taiwan’s cumulative investments in these countries also reached US$95 billion, representing 12,000 individual investment cases, while tourist arrivals in Taiwan from southbound countries increased by 28.64 per cent between October 2016 to March 2017, compared to the same period of the previous year, which has outpaced the increase in the overall number of tourists arriving in Taiwan.

President Tsai also said she considers the Philippines a very important part in Taiwan’s new southbound thrust, particularly with the presence of Taiwanese investments in the Philippines, which they aim to expand. “We have so many investors in the Philippines, and your president plays a lot of emphasis on developing industrial sector and this is an area that we have lots of experience,” she said.

She added, however, that Taiwan may still need to come up with some bilateral agreement with the Philippine government to improve business environment and to provide protection for Taiwanese investors in the country. 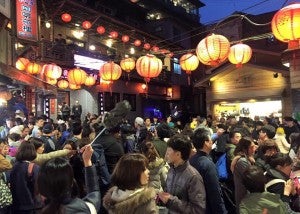 While Taiwan’s cozying up to the Asean neighbors may appear to be a move to wean itself away from mainland China, Taiwanese top trade officials said this should not be the case, since China remains Taiwan’s top trading partner and destination of 40 percent of Taiwan’s exports.  “China, of course, remains a very important market, but growth in this market is getting mature at 4.5 percent, compared to India, which posts a seven per cent growth and some countries in the Asean, at 6 to 7 percent,” said Minister without Portfolio John Chen-Chung Deng in an earlier briefing with journalists.

“This is not about geo-politics but economics and trade,” said President Tsai.  “The New Southbound Policy is not about making a political statement in the region. It is about fostering a mutually beneficial relationship with the international community. It isn’t about competing with China, but about emphasizing Taiwan’s own advantages and promoting mutually beneficial development as a member of the regional community,” Tsai said. “This is the key message we want to convey,” the Taiwan President told visiting journalists in Taipei. “Many people in Taiwan are highly interested in New Southbound countries, including myself.”

Deng said there are already 500,000 foreign people working in Taiwan, who included Indonesians, Vietnamese, Filipinos, and many of them have stayed in Taiwan and married Taiwanese. He said Taiwan is taking interest on the relationship that developed between the Taiwanese and people in Southeast Asia, taking note that children who sprung from these marriages already reached 600,000 to 700,000.  Taiwan wants to tap these ties to strengthen links with its closest neighbors in Asia.  They want to keep these children get in touch with their own culture so that in the future, they can serve as Taiwan’s ambassadors to their homeland,” said Tan.

She first arrived here over two decades ago to work in a factory producing electrical sockets, where she met her Taiwanese husband.  Being a Tsinay, she can speak and understand Mandarin, but she had hankered after food back home.  Now, Taiwanese entrepreneurs had been asking her what kind of Taiwanese food can best be sold  in the Philippines as Taiwanese entrepreneurs think of doing business there.

Taiwan is also taking notice of the food and the culture that migrant workers and immigrants from Southeast Asia are bringing here, said Emily Hsu-wen Yuan, research assistant of the education department of the National Taiwan Museum.   Taiwan’s National Museum is organizing an exhibit that features spices and plants from Southeast Asia to get to know the food and culture that immigrants have brought with them here and to let the Taiwanese people know about the different landscape of the countries these spices and plants are coming from.  “We’re working with the embassies and representatives from Vietnam, Indonesia and the Philippines to put up the exhibit that will run for three months,” said Yuan.

Tan remembers how, when she first came here, she used to miss the tastes of home.  Now, she’s been cooking sinigang right in her kitchen, which her children love. She has also helped research the herbs and spices so common in the Philippines but which are not found here, despite the fact that Taiwan, after all, is not too far from home.