British in Manila told to stay away from Quiapo | Global News

British in Manila told to stay away from Quiapo 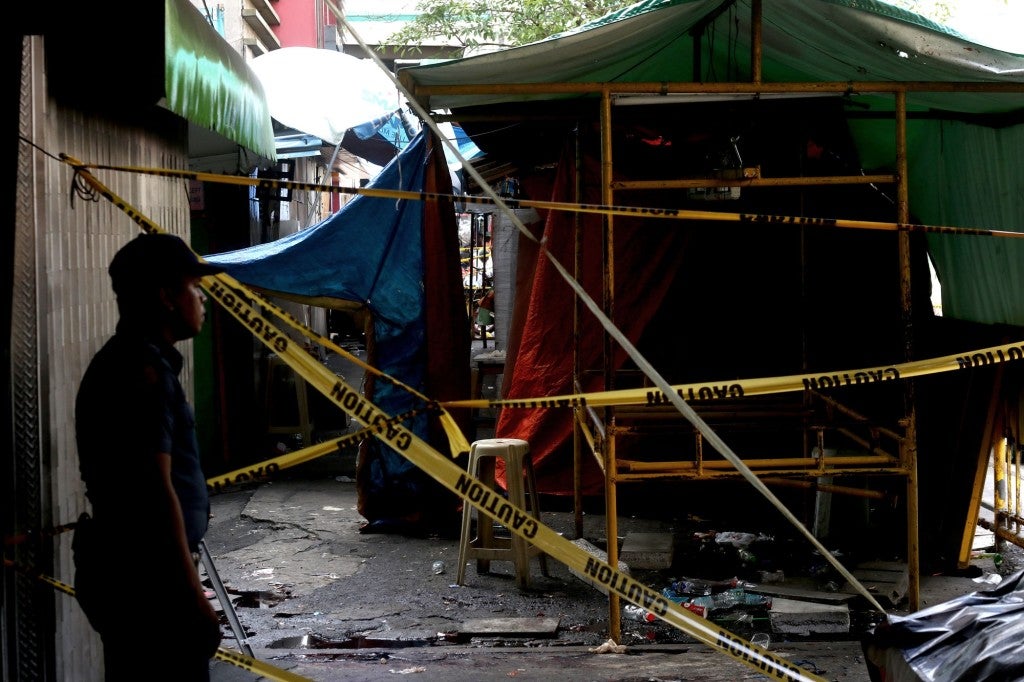 The blast site where at least 14 people were injured following an explosion at a commercial area along Quezon Boulevard, Quiapo, Manila. INQUIRER PHOTO / RICHARD A. REYES

MANILA — The British Embassy in Manila has advised its citizens to stay away from the Quiapo area in Manila a day after it was hit by twin explosions that killed two.

It also urged its citizens to be extra vigilant when traveling to other parts of the Philippines, noting the possibility of terrorist attacks anytime and anywhere in the country.

In a travel advisory issued on Sunday, the UK Foreign and Commonwealth Office (FCO) told British tourists to keep up to date with the local media and follow the advice of local authorities following the two explosions in Quiapo, Manila.

It further said that attacks could happen in places visited by foreigners like airports, shopping malls, public transport and places of worship. “You should remain vigilant at all times and report anything suspicious to the local authorities.”

It reiterated its earlier advise for its citizens against all travel to western Mindanao and Sulu island due to terrorist activity and the clashes between the military and insurgent groups.

“The FCO advise against all but essential travel to the remainder of Mindanao and to the south of Cebu province, up to and including the municipalities of Dalaguete and Badian, due to the threat of terrorism,” it added.

It also warned British nationals of the increasing number of kidnapping incidents of foreign nationals since the later part of 2015.

“This threat extends throughout the Philippines both on land and at sea, but is particularly acute in the southern Philippines,” it said, particularly identifying Mindanao, southern Palawan and central Visayas, including Siquijor and Dumaguete.

Police reported that the first explosion in Quiapo on Saturday originated from a package delivered to the office of lawyer Nasser Abinal, president of the Imamate Islamic Center. Authorities are still investigating the motive for the attacks.  SFM