But gov’t says it asked her to reconsider Manila trip because a Philippine delegation was visiting Geneva to see her
By: Jeannette I. Andrade, Leila B. Salaverria - @inquirerdotnet
Philippine Daily Inquirer / 12:32 AM May 07, 2017 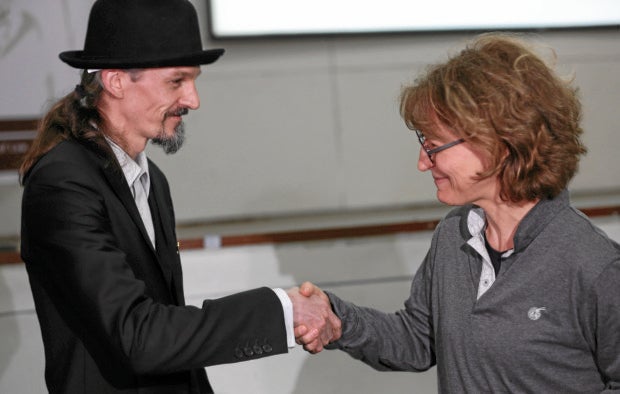 United Nations special rapporteur Agnes Callamard shakes hands with Pascal Tanguay, a drug policy expert from Thailand, during a forum at the University of the Philippines in Quezon City. —NIÑO JESUS ORBETA

United Nations special rapporteur Agnes Callamard hit out at the government on Saturday for questioning her visit here to attend a private academic event, saying that Manila knew beforehand she was coming contrary to what it claims.

But Malacañang said it was standing by its statement even as Callamard, the special rapporteur on extrajudicial, summary or arbitrary executions, said the government knew she was coming to take part in a two-day forum on illegal drugs also attended by other foreign experts beginning Friday.

Callamard said that she informed the government on April 28 of the trip, which she had made clear would be carried out in her private capacity, and not an official trip.

On April 29 and May 1, the government replied and reacted to her forthcoming trip, she said.

“Exchanges on this matter by phone, mail and e-mail between my mandate and the Permanent Mission of the Philippines continued until  May 4,” Callamard said.

She said she rejected a statement made by presidential spokesperson Ernesto Abella “stating that the Philippine government had not been informed in advance of my trip to the country.”

She stressed that the trip was not an official country visit and that it was normal for special rapporteurs to visit countries to attend different conferences and events.

But Abella on Saturday said the Philippine Mission in Geneva, Switzerland, had asked Callamard to “reconsider” her trip to the Philippines because a delegation from the country would be in Geneva at the same time for the Universal Periodic Review (UPR) of the human rights situation in the country and were expecting to see her.

“She conveniently failed to disclose that when the UNHCR (United Nations High Commissioner for Refugees) office in Geneva informed the Philippine Mission there, the mission asked her to reconsider the trip since Philippine officials would be in Geneva at the same time for the Universal Periodic Review, and were expecting to see her, that being the appropriate venue to meet,” he said.

Abella further said that Callamard’s “delayed response” to the government’s request only came on the day she left for the Philippines.

“This was neither timely nor proper courtesy accorded to a sovereign nation. We stand by our statement,” Abella said.

Callamard also questioned the government’s claim that she did not accept its invitation to conduct an official visit to the country.

She noted that she had rejected the conditions attached to the invitation, and said she still wanted to conduct an investigation here over the thousands of deaths attributed to the President’s drug war.

“Last year, I rejected the conditions imposed by the government on the visit, as they did not comply with the rules and methods of work of Special Procedures of the Human Rights Council. I look forward to a positive engagement with the government of the Philippines on issues of interest to my mandate. I remain deeply committed to undertake an official visit to the country,” she said.

Manila’s Permanent Representative to the United Nations, Teodoro Locsin, took to Twitter to say that Callamard’s unannounced trip came with consequences. He said a case filed against Mr. Duterte before the International Criminal Court (ICC) by two self-confessed hit men was now “dead as a door nail.”

“Thank you Agnes, you just solidified the country behind Duterte and his drug war, and thoroughly discredited any criticism of him and it,” said Locsin, who formally assumed his post two weeks ago.

He stressed that the UN headquarters in Geneva was the “proper venue” to discuss the allegations.

“Every country in the UN—US, Israel, India, Saudi, Latin Am, EU pushing refugees out to sea—will have nothing to do with her. Curtains,” he said.

“To say she informed PH govt acknowledges that it has a say in her trip & how it affects her role as UN rapporteur. She came anyway. Bye.

“Good night everyone. Again, thank you Agnes (Callamard). The ICC case is dead. Trust me on this. Dead as a door nail,” he said.

Sen. Alan Peter Cayetano, who leads the Philippine delegation to defend the government’s antidrug war at the UPR in Geneva, dismissed as “alternative facts” the accusations that thousands have died in the campaign.

“If only there was a less political, more unbiased and fair way of describing what is happening in the Philippines, we will be having a more constructive discussion rather than groups throwing alternative facts and fake news,” Cayetano told a side event attended by state representatives attending the UPR.

The senator defended the Duterte administration’s campaign against crime, illegal drugs and corruption, saying they were “being portrayed wrongfully in the international community.”

Cayetano noted that there were also extrajudicial killings in previous administrations. He noted that out of 9,432 murder and homicide cases during the Duterte administration, only 1,847 are drug related.