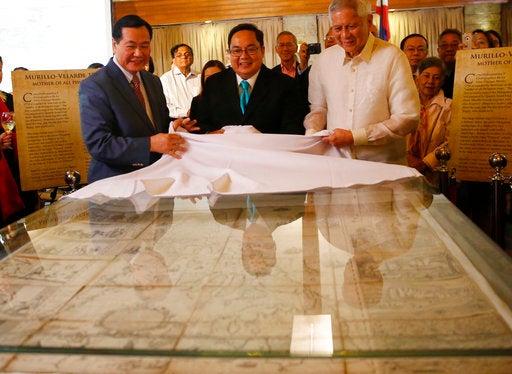 From left, Philippine Supreme Court Senior Associate Justice Antonio Carpio, Mel Velasco Velarde and former Foreign Affairs Secretary Albert Del Rosario unveil the original copy of the 1734 Murillo-Velarde Map which shows the disputed Spratlys group of islands and the Scarborough Shoal during the launching of his e-book titled “The South China Sea Dispute: Philippine Sovereign Rights and Jurisdiction in the West Philippine Sea” in the financial district of Makati city east of Manila, Philippines, Thursday, May 4, 2017. A Philippine Supreme Court justice launched a book on Thursday that questions China’s historic claims to most of the South China Sea and said he will distribute it online to try to overcome China’s censorship and reach its people. AP PHOTO

Supreme Court Senior Associate Justice Antonio Carpio launched a book on Thursday that questions China’s historic claims to most of the South China Sea and said he will distribute it online to try to overcome China’s censorship and reach its people.

Carpio said his e-book can be downloaded for free in English now and will be made available later in Mandarin, Vietnamese, Bahasa, Japanese and Spanish to help more people understand the basis of the Philippines’ stand against China’s territorial claims.

Carpio said public opinion, including in China, can help pressure Beijing to comply with an arbitration ruling last year that invalidated China’s historic claims based on a 1982 maritime treaty. Carpio helped prepare the arbitration case, which the Philippines largely won.

China has dismissed the ruling and continued to develop seven artificial islands in the South China Sea’s Spratly archipelago. China’s construction of the islands on disputed reefs has alarmed rival claimants and the United States.

“This book in its printed form can never be distributed in China. It will be banned,” Carpio said at the launch of his book in Manila. “The only way this e-book can reach the Chinese people is in electronic format through the internet.”

“I believe that like all other people of the world, the Chinese people are inherently good, but their government has drilled into their minds that they own the South China Sea since 2,000 years ago. This is, of course, utterly false and the world will never accept this,” he said.

Chinese Embassy officials were not immediately available for comment.

Former Philippine Foreign Secretary Albert del Rosario, who spearheaded the filing of the arbitration case against China in 2013, praised Carpio for promoting the rule of law and how that worked well for a small country standing up to a superpower, saying “international law is the great equalizer.” He gave a speech at the launch of Carpio’s book and said they stood together with most Filipinos in agreement that international rule of law applied to all.

Carpio’s studies on the South China Sea disputes are not part of his work on the Supreme Court. He said he asked the court’s permission in 2015 to give lectures in 17 countries to explain the territorial conflicts, which many fear could become Asia’s next flashpoint.

Carpio warns in the book that China may be planning to build more island outposts at Luconia Shoal off Malaysia and Scarborough Shoal off the northwestern Philippines.

If it constructs an island base at Scarborough, China would have enough radar coverage of the South China Sea to be able to impose an air defense identification zone similar to what it did a few years ago in the East Sea in a region where it has territorial rifts with Japan, he said.

China and the Philippines, along with Brunei, Malaysia, Vietnam and Taiwan have overlapping claims to parts or all of the South China Sea that straddle busy sea lanes and are believed to be atop undersea deposits of oil and gas./rga

Read Next
Palace hits Callamard, to raise unannounced visit before UN
EDITORS' PICK
A laptop that maximizes your WiFi so you can maximize your productivity
Why Tagle is a leading papal contender
In Borongan, nuns play hoops (not mahjong)
Powered by style, innovation and passion
House energy committee chair Arroyo bats for cheap electricity
KWF has no power to ban, censor written works – Lagman
MOST READ
Why Tagle is a leading papal contender
Arjo Atayde reveals proposal to Maine Mendoza was ‘more than a year’ in the making
My neighbor FVR: From soldier to president
Gilas gets solid core with Clarkson, Sotto planing in
Don't miss out on the latest news and information.