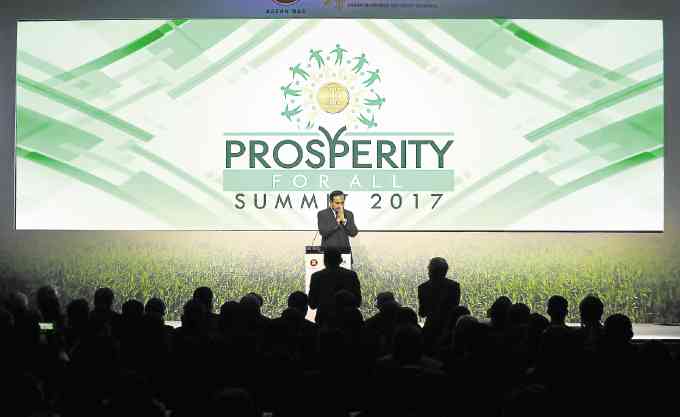 Southeast Asian government and business leaders said the fruits of the region’s rapid economic growth should reach the grassroots to help stop people from embracing extremist and antiglobalist sentiments.

Addressing the Prosperity Summit for All 2017 at City of Dreams Manila in Parañaque City on Friday, Malaysian Prime Minister Najib Razak said people who feel marginalized were often vulnerable to  “siren calls of terrorist groups.”

He said his own country had been aiming for inclusive growth and had “virtually eliminated” poverty, reducing it to just 0.6 percent.

“We do not want any of our citizens to be marginalized in an age of extremism and radicalization, and there is a practical reason for that,” he said.

The Prosperity Summit was held to complement various gatherings ahead of Saturday’s leaders’ meeting in Manila of the Association of Southeast Asian Nations (Asean), which mainly focused  on economic cooperation but  increasingly grappled with regional political and security issues.

The 30th Asean Summit is hosted by the Philippines, the regional bloc’s chair this year, its 50th founding anniversary.

Najib said while the Asean economy was expected to be the world’s fourth-richest in a few decades, the question of how best to spread the wealth that was being created  remained to be answered.

“Another challenge that the Asean faces, and we should bear it in mind particularly in this 50th anniversary year, is the need both to raise awareness of Asean and to make it feel real, relevant and tangible to all our citizens,” Najib said.

He said the regional bloc should also learn from Europe’s experience with growing extremism.

One of the lessons in the rise of extremist populism in Europe, he said, was that a “neglected underclass—those who felt left behind by economic growth, prosperity and the benefits of globalization—[could] overturn elections and political systems.”

“I am not saying that Asean countries want to go that far, but to what extent do our peoples think of themselves as being members of Asean?” he added.

Vice President Leni Robredo echoed Najib’s message, noting that the benefits of economic prosperity has not trickled down, adding that despite the growing number of Asian billionaires, the region was “still home to many of the world’s poor.”

“Small businesses are not graduating into big ones on a scale that can move the needle enough to change our future. Even MSMEs (micro-, small- and  medium-sized enterprises) have not completely solved the problem of inclusivity,” she said.

Asean Business Advisory Council chair (Abac) Joey Concepcion said many of the MSMEs, which composed 99.6 percent of businesses in the Philippines, did not seem to share in the gains from economic growth.

“Many Filipinos out there do feel that they have not been part of the growing economy,” he said. “We see that 99.6 percent of the entire business community belong to this sector. This mirrors all the way down to the other Asean countries who are also in the same boat we are in.”

Robredo urged investors and policy makers to deal with the problem of how to spread the benefits of economic growth, not by giving dole-outs, but by embarking on inclusive business models, as these had a wider reach and could keep the process sustainable and profitable.

Businesses should also focus on specific industries that would directly impact the poor, she said, citing agriculture as an example.

Robredo said one fastfood chain was helping promote inclusive growth by sourcing an ingredient of its products from local farmers instead of importing it.

“Let me point out that these are not dole-outs or charitable activities. Partnerships like these should be profitable if they are to be sustainable—and they are,” she said.

The Vice President said the government should facilitate convergence and communication, encourage technology and innovation, and create financing mechanisms for smaller players to “survive  cutthroat competition.”

Abac organized the Prosperity Summit where notable investors and policymakers spoke at its forums to discuss various factors that affect MSME growth in Southeast Asia.

Abac is set to launch in November the Asean Mentorship Entrepeneurship Network, which Concepcion said would link MSMEs and big corporations at the regional level.