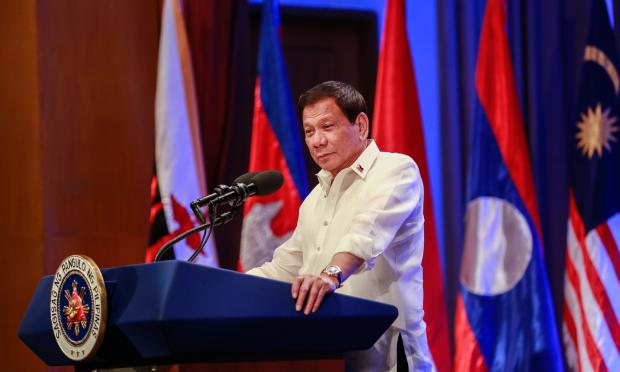 President Rodrigo Duterte held a press briefing on Saturday, April 29, 2017, before hosting a gala dinner for the Asean Summit leaders. (Photo from the official website of the 30th Asean Summit)

As tensions rise in the Korean Peninsula, President Rodrigo Duterte appealed on Saturday to US President Donald Trump to observe restraint in dealing with North Korean leader Kim Jong-un “because the guy just wants to end the world.”

Mr. Duterte, who was expecting a call from Trump on Saturday night, said he was sure the American leader had also cautioned his military not to exacerbate the situation with North Korea.

“I’m expecting a call, actually, from President Trump tonight, and who am I to say [he] should stop. But I would say,
Mr. President, please see to it there is no war because my region will suffer immensely. The first fallout would be us in Asia,” he said in a press conference after hosting the 30th summit of the Association of Southeast Asian Nations.

It behooves the US, who wields the “biggest stick,” to be “prudent and patient,” Mr. Duterte said.

“Do not play into his hands. The guy simply wants to end the world. That’s why he’s very happy. He’s always smiling. He wants to finish everything and they will drag us down,” he said.

Mr. Duterte said he was worried, as “we’re on the edge,” and one missile launch could worsen the situation.

“There seems to be two countries playing with their toys and those toys are not really to entertain,” he said, adding that the situation was “extremely worrying” for the region.

“I would not want to go into his mind because I really don’t know what’s inside. But he’s putting Mother Earth, the planet to an edge,” he added.

One miscalculation could cause a catastrophe, he added.

“Everybody is worried. Nobody is clapping his hands. And I’m sure that if war breaks out in the Korean peninsula, the imponderables of life, you cannot foresee, even project what will happen, whether China will just stand idly or hold its hands or Russia, [or whether] China would come to the rescue [as well as] Britain, France, America and the rest. Japan would also join the melee,” he said. /atm