No extended stay for Asean leaders in PH | Global News

No extended stay for Asean leaders in PH 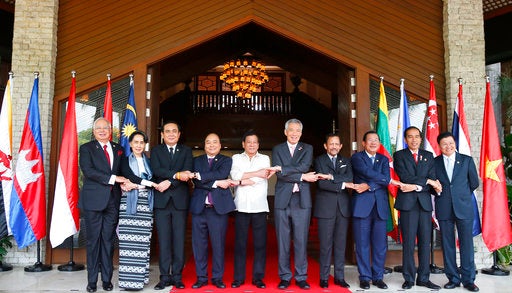 State leaders who participated in the Association of Southeast Asian Nations (Asean) Summit will start departing on Saturday, the same day the main event happened in Manila.

The first leader to leave the Philippines is Myanmar State Counselor Aung San Suu Kyi. Her flight is scheduled to depart 6 p.m. at the Ninoy Aquino International Airport (Naia) Terminal 2 on Saturday.

Suu Kyi will leave right after the 30th Asean retreat and signing ceremony held at the Coconut Palace and the Philippine International Convention Center (PICC), respectively.

Following Suu Kyi is Singapore Prime Minister Lee Hsien Loong. He is scheduled to fly back to the city-state at 9:15 p.m. at Naia Terminal 1.

Delegates from Vietnam, Laos and Thailand will all depart from Naia Terminal 1.

Meanwhile, Indonesian President Joko Widodo will stay behind for one more day. He and the rest of the Asean leaders will leave on Sunday morning.

The departure schedule of Brunei Darussalam’s Sultan Hassanal Bolkiah, who was the first to arrive in Manila last Wednesday, has yet to be announced.

The Philippines, as the chairman of this year’s Asean, hosted the series of meetings and events in Manila from April 26 to 29. IDL

Read Next
‘Goodwill visit’: 3 Chinese warships to dock in Davao
EDITORS' PICK
Pagasa: Warm, sunny Sunday in most parts of PH
Is it safe to talk politics again at family gatherings? ‘The Reconciliation Dinner’ shows us what that’s like
House energy committee chair Arroyo bats for cheap electricity
EDITORIAL: To a bike-friendly future
The Best Tech Gifts For The 2022 Holidays
vivo’s coming to town to grant wishes with more holiday promos
MOST READ
LOOK: Vhong Navarro transferred to BJMP detention facility in Taguig
The Elephant Man in the Senate
Posh village as ‘shabu’ haven
LOOK: Zanjoe Marudo bonds with Ria Atayde, her family
Don't miss out on the latest news and information.