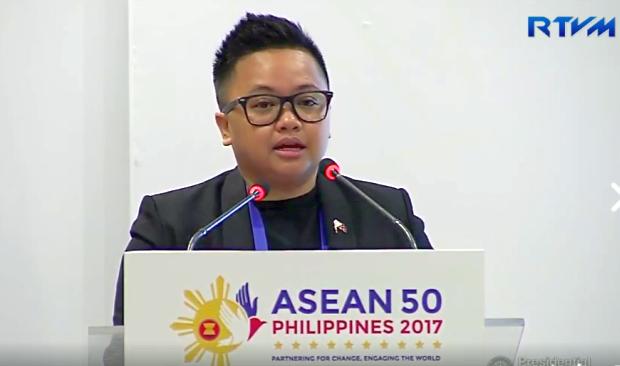 In a news conference at the Asean media center, Seguerra said the Asean youth adopted the theme “Asean Workplan for the Youth: Transcending Regional Boundaries.”

Seguerra said the meeting, which was attended by 37 Filipino participants, focused on competence and resilience of climate arrangement, entrepreneurship, employment, Asean awareness and education, nad youth voluntarism, among others.

Seguerra said the participants convened in a plenary and drafted the message to be read during the Interface with the Asean leaders at the Philippine International Convention Center (PICC) on Saturday.

The draft statement was referred to the delegates for feedback, Seguerra said.

She said the Asean youth was very “passionate” about the need to take care of the future of the Earth in the face of a changing global climate.

“We want to make sure that our Earth will be habitable for the next few years for all of us,” Seguerra said.

A staunch supporter of President Rodrigo Duterte, Seguerra was appointed NYC chairperson. She has vowed to address issues surrounding young people afflicted with the human immunodeficiency virus (HIV). She has pushed for the lowering of age requirement for HIV testing to 15 years old.

The Philippines is host of the 30th ASEAN Summit which would run from April 26 to 29 in Manila. Duterte is this year’s ASEAN chair, who would host the first of two annual meetings of ASEAN leaders on Saturday. /atm