Suu Kyi arrived at the Naia Terminal 2 at 2:40 p.m. She was welcomed by Health Secretary Paulyn Ubial.

Myanmar’s de facto leader widely perceived as a democracy icon arrived in Manila to attend the Asean Summit plenary to be hosted by President Rodrigo Duterte.

The Philippines is chair of this year’s Asean summit.

Duterte met Suu Kyi in Myanmar last March for bilateral talks and for the signing of the memorandum of understanding on food security and agricultural cooperation. 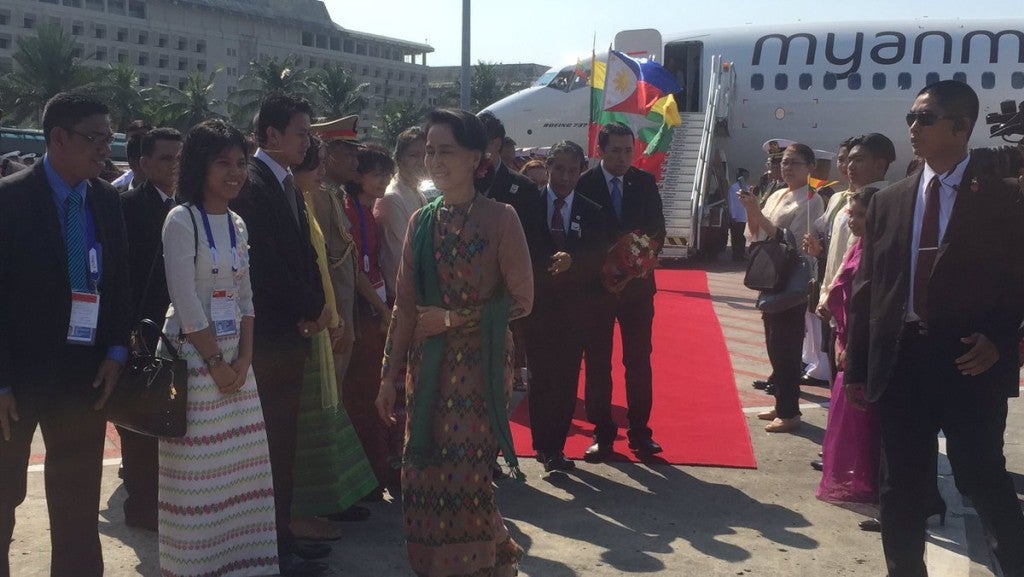 Duterte also handed over a symbolic certificate for the Philippines’ $300,000 contribution to Myanmar’s humanitarian efforts to the Rakhine State.

The Nobel Peace Prize winner Suu Kyi earned criticisms for denying there is the ethnic cleansing despite reports of military abuses against the country’s Rohingya Muslim minority in the Rakhine State.

Suu Kyi was intermittently placed under house arrest from 1989 to 1995 and 2000 to 2010 for being the voice of the opposition against the military government. She won the Nobel Peace Prize in 1991.

She was conditionally released in 2010. In 2015, she led her party the National League for Democracy in reclaiming majority of parliament seats.

Suu Kyi was given the position of state counselor because of a constitutional prohibition against her from running for president. Her confidante Htin Kyaw was elected  president by the parliament. IDL//rga