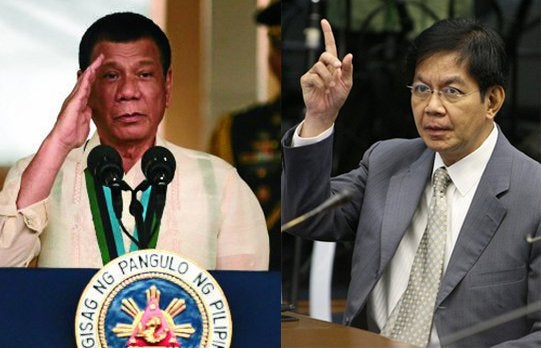 President Rodrigo Duterte is “wrong about the power and influence of international pressure on China,” Senator Panfilo “Ping” Lacson said on Friday.

Lacson was reacting to Duterte’s statement that no one, even international opinion, could pressure China on the South China Sea dispute.

“Studies show that arbitrary rulings are normally defied if not ignored by losing claimants of contested territories albeit temporarily,” said the senator.

“In the course of time, these countries almost always eventually give up and comply with the ruling due to international pressure,” he said.

Lacson also did not agree with the President’s decision not to raise at the Asean Summit this week the United Nation’s arbitral ruling in favor of the Philippines’ protest against China’s claim over the South China Sea.

“We should not miss the ASEAN summit to avail ourselves with that opportunity, lest we would regret it,” he said.

“PRRD (Duterte’s initials) may be correct though that decided disputes cannot be resolved militarily even assuming that we can match China’s military hardware and troops. The same studies say as much,” the senator added.

Dutere said there was no point discussing the UN ruling during the summit since the issue was only between the Philippines and China.

“What could be the purpose also of discussing it kung wala kang magawa (if you cannot do anything about it)?” he said on Thursday.

Asked if the Philippines could pressure China by way of international opinion, Duterte said: “You cannot do that, you’re just dreaming. Those are theories which you are dreaming. That’s really the (Barack) Obama style. All dreams.” IDL/rga