The Philippines and Brunei, which have rival claims in the South China Sea, on Thursday agreed to work for the peaceful resolution of disputes in the strategic waterway.

President Duterte of the Philippines and Sultan Hassanal Bolkiah of Brunei also emphasized the importance of the full and effective implementation of the Declaration on the Conduct of Parties in the South China Sea, signed in 2002 by the Association of Southeast Asian Nations (Asean) and China to maintain peace and stability in the region despite the competing territorial claims.

The two leaders also welcomed the progress in the consultations on the framework of a proposed code of conduct that would prevent the disputes from erupting into conflict.

China claims almost all of the South China Sea, including waters within the exclusive economic zones of Brunei, Malaysia, the Philippines and Vietnam. 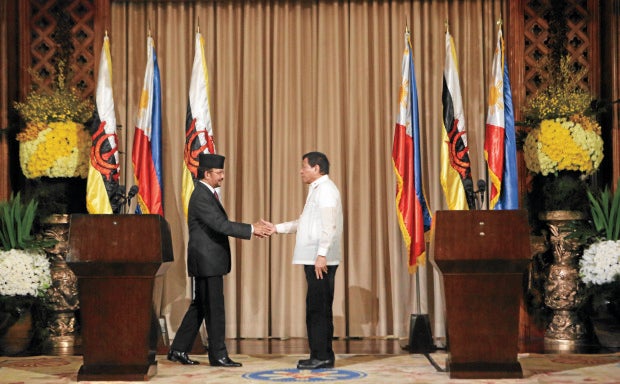 The South China Sea disputes were among the matters Mr. Duterte and Bolkiah took up during their bilateral meeting in Malacañang on Thursday.

The two leaders, who affirmed the strong ties between their countries, also discussed cooperation on trade and security issues.

Bolkiah is in the Philippines for a state visit and to attend the 30th Asean summit in Manila.

The Philippines, which plays host to the summit, is pushing for the completion of the framework for a code of conduct between Asean and China this year.

“We will work together to ensure that the principled position for the peaceful resolution of disputes will be articulated fully,” Mr. Duterte said after his meeting with Bolkiah.

“This is a collective interest that must be upheld in the implementation of the Declaration [on the Conduct of Parties] and greater progress on the framework of code of conduct in [the] South China Sea,” he added.

Mr. Duterte said the members of the international community have duties that they must abide by as they seek peace, stability and security in the South China Sea.

Brunei and the Philippines will also continue their cooperation in the campaign against terrorism, violent extremism and piracy at sea, he said.

They will also work together for peace and development in Mindanao, he said.

Bolkiah said Brunei would work with the Philippines in combating illegal drugs.

“We also look forward to our future collaboration in addressing issues on drugs. We believe that both sides will benefit from the exchanges of expertise and best practices in this area,” Bolkiah said.

Mr. Duterte and Bolkiah also witnessed the signing of an agreement on cultural cooperation and a memorandum of understanding on the halal industry and halal export development and promotion.

Bolkiah said Brunei was interested in developing a partnership with the Philippines for investment and the production of halal products as part of their economic cooperation.

On energy matters, oil-rich Brunei will cooperate with the Philippines in exploring “potential downstream and upstream activities,” Bolkiah said.

He also expressed appreciation for the contributions of 23,000 Filipino migrant workers in Brunei. Many of the Filipinos there work as teachers, health professionals and engineers.

Bolkiah is the first head of state to come to the Philippines on a state visit during Mr. Duterte’s term, and the second to arrive in the country.

Commenting on Asean efforts toward a peaceful resolution of the South China Sea disputes, Jose Concepcion III, chair of the Asean Business Advisory Council (Abac), said the Philippines and other members of the bloc stood to benefit and prosper from good relations with China.

Among the “tremendous” benefits that Asean countries will get from having good ties with China is tourism, given China’s population of more than 1 billion, Concepcion said on Thursday.

Speaking at a news conference, Concepcion said he looked at Mr. Duterte’s bid to make Manila a partner rather than an adversary of Beijing as “the right step” toward rebuilding ties with China.

Abac is holding a “Prosperity for All” meeting on Friday on the sidelines of the Asean summit.

Mr. Duterte has deferred assertion of an international arbitration tribunal in favor of the Philippines in the South China Sea dispute and instead set about rebuilding relations with China.

Concepcion conceded that the Philippines has no military power to challenge China, but said that the country has the power to pursue good relations with its neighbors in the region through the friendliness and hospitableness of its people. —WITH A REPORT FROM CHRISTINE O. AVENDAÑO