The proposal to lower the age of criminal responsibility has been the subject of debates and commentaries in both the halls of Congress and the pages of the country’s top newspapers.

Adults have weighed in on the controversial measure deemed necessary by President Rodrigo Duterte and his allies in curbing criminality in the Philippines.

On Wednesday, Plan International’s “youth advocates” were asked about their thoughts on the proposed bill, which seeks to lower the minimum age of criminal responsibility to 9 years old. The current Juvenile Justice and Welfare Act (Republic Act 9344) prescribes a minimum age of 15 years old.

Ghene, a 16-year-old girl from Ifugao, said such a law would “kill” the hope of Filipinos.

“I’m speaking in behalf of every other girl and every other child here in the Philippines,” said Ghene during a forum at the European Union office in Makati. “The lowering of the minimum age of criminal responsibility, if it will be passed, it will be one of the biggest fails of the Philippine government.”

She said children should not be jailed and punished.

“Why punish these children? Why not care for them and give them the chance and help improve their lives rather than put them into prison?” she said, adding that young people need guidance.

Ghene pointed out that the current generation of adults and lawmakers should be responsible for leaving a legacy that would be beneficial for the next generation.

“So I don’t agree that the lowering of the minimum age of criminal responsibility because it will only kill our hope,” she said.

Dutch Ambassador Marion Derckx said she agreed with Ghene that lowering the age of criminal liability would be a “big mistake.

She said there was already a lot of studies on the issue.

“Children are children and you cannot make them responsible for (criminal) acts. If you talk about 8 years 9 years, it’s really too early,” the ambassador said.

Rep. Divina Grace Yu, chair of the House Committee on the Welfare of Children, promised that she would bring Ghene and the voice of the children to Congress once the proposed bill is deliberated on.

Ghene, Derckx and Yu were guest speakers at the launch of the EU Guidelines for the Promotion and Protection of the Rights of the Child.

Mattias Lentz, minister counsellor of the EU delegation in the Philippines, said the updated guidelines would help them be “more effective in [their] actions.”

Ghene and Jake were asked to take over the social media accounts of EU to encourage discussion of children’s issues as part of an awareness campaign.

During the forum, dubbed “#YouthTakeover: Leave No Child Behind,” Ghene and Jake, a 15-year-old boy from Samar, talked about their experiences and how adults could help young Filipinos like them.

Ghene shared how her friends stopped studying because of teenage pregnancy and poverty.

“These girls holding a pen and a paper and a book and a dream, they are living in poverty instead,” she said.

Ghene, who said she would want to be a lawyer or a diplomat and even president of the Philippines, said she often saw homeless and hungry children in the streets.

“These children deprived of their rights can be the next world leaders!” she said.

“Since they did not complete their studies and got married early, decent work is difficult to find. Their limited income affects their ability to provide for their children,” he said, explaining the cycle of poverty.

In their speeches, they called for social protection programs and involvement of children in discussions about their rights and protection.

The EU Guidelines for the Promotion and Protection of the Rights of the Child makes the EU responsible for encouraging partner countries like the Philippines to adopt a national strategy on the rights of the child and to implement “child sensitive national budgeting,” which provides for children in vulnerable situations, among others. /atm 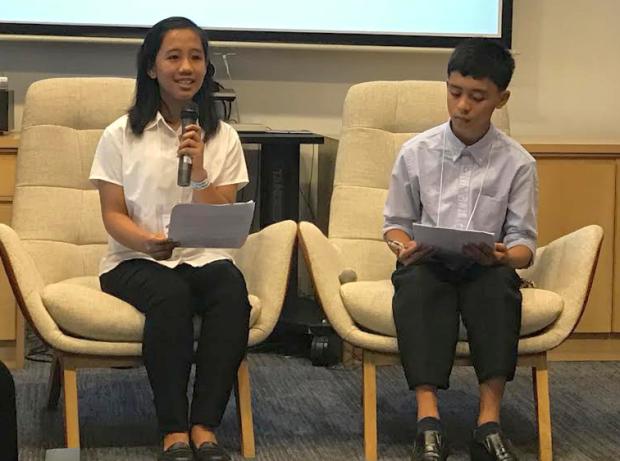 Ghene, a 16-year-old native of Ifugao, says adults should leave a legacy that would benefit the next generation. (Photo by KRISTINE ANGELI SABILLO)